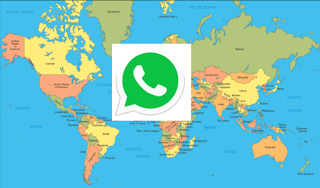 One of the most popular Instant Messaging app, WhatsApp service was on Wednesday, May
3 restored but late in the afternoon following a worldwide downtime which made
the service to be inaccessible for some hours.

According to a WhatsApp spokesman through a mail which says: “Earlier today, WhatsApp users in all
parts of the world were unable to access WhatsApp for a few hours. We have now
fixed the issue and apologize for the inconvenience.”

The spokesperson spoke with Business Insider and said the
outage was initiated by WhatsApp itself, instead of an external cause.
Related Posts

When asked if the outage affected all WhatsApp’s handlers,
the spokesperson repeated that it was a “global” issue, but stated
that it was impossible to assume whether all its users were affected.
WhatsApp which is owned by Facebook is among the most
popular communications apps used globally. It can boast of more than a billion
users. The app was noted to have stopped functioning around 4:50 p.m. ET (8:00 pm
GMT) on Wednesday.
The issue happened during a period the Facebook’s senior
management was on a quarterly-earnings conference call with Wall Street
analysts and investors. Facebook hyped the popularity of new WhatsApp features when
making the call, but did not mentioned the huge outage proceeding that very moment.
Twitter found itself under pressure following the outrage of
WhatsApp users took to the app to unleash their frustrations.
Instant appmobileNews
Share