By Andre Falana On Apr 12, 2017
Share
Join Us On Telegram
The Indigenous People of Biafra (IPOB) has asked on its
members and associates globally to stay calm over the fresh report on the deal between
the United States of American and Nigeria government on war jets 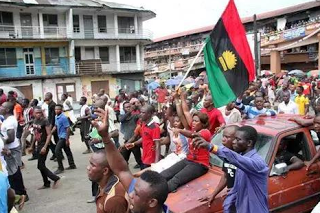 The IPOB noted that the move by the US was to defeat Boko
Haram.

A declaration was made by the media and publicity secretary
of the IPOB, Powerful Emma. He said that, now it is the responsibility of its
members in the US to make the reasons available to the United States government
that the sale of the aircraft to Nigeria is detrimental and not safe.
He said: “The
United States of America is a country of civilised people, therefore, they base
their foreign policy decisions on cold hard facts and self-preservation, not
sentiment or emotion.
ALSO READ: As
freedom fighters, no amount of persecution can stop us – MASSOB

“Nigeria remains
a ‘sovereign’ state, with the backing of US closest ally Britain that created
it. What we are witnessing here is international politics at play and nothing
for IPOB to worry about.

“Britain having
publicly vowed to save the Nigeria recently when they said they won’t allow any
break-up, have now gone the extra mile to back up their words with military
assistance from the world’s top super power, which is to be expected under the
circumstance.”
Related Posts

It was also gathered that the group believed that the move was
politically inspired by the British government.
Emma further stated: “Liberation
struggle is never a walk in the park or endless smooth sailing, sometimes you
get knocked sideways but you recover and continue marching forwards.

“The question we must
ask is this, is the existential threat of Boko Haram more compelling at this
material time to necessitate military assistance from the US to the Nigeria
vis-a-vis human rights needs? Unfortunately the answer is yes, because
President Donald Trump knows that there is no way the Nigeria Air Force could
conceivably conduct unprovoked and disproportionate bombing raids against
Biafran populations in this digital day and age.”
ALSO READ: As
freedom fighters, no amount of persecution can stop us – MASSOB
Emma admonished all IPOB members and associates not to consent
to any distraction from the group’s drive.

“Boko Haram is an
extremist violent Islamic group and therefore falls within the category of
issues that US accord the utmost priority, so this deal is nothing to worry
about.

“We must not forget
that we IPOB, especially the new leadership in the US, can stop this deal dead
in its tracks if we work doubly hard to invoke the Leahy Law, but then again do
we want Boko Haram to continue to gain ground unchecked?

“These are hard
questions we must address with cool heads. The battle for Biafra independence
will not be determined with fighter jets and bombers but with the influence of
friends and allies in the corridors of power all over the whole world,”
Emma said.
biafraIPOBMASSOBNewsNigeriaUnited States
Share

As freedom fighters, no amount of persecution can stop us – MASSOB