By Andre Falana On Apr 16, 2017
Share
Join Us On Telegram
Related Posts 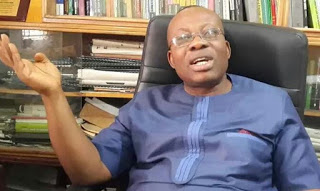 Barrister Monday Ubani, who is the second national vice-president of the Nigerian Bar Associatio (NBA), has raised up six serious questions concerning the huge sums of foreign currencies recently discovered by the Economic and Financial Crimes Commission (EFCC) in a luxury building in Ikoyi, Lagos.
The owner of the alleged discovered fund which includes $43 million has remained unknown hours after it was recovered. All those suspected by the agency have came out to deny any knowledge of the reported cash.
Recall that on April 14, 2017, the National Intelligence Agency (NIA) suddenly woke up to announce that it’s the owner of the money. Just few moments later, the Governor of Rivers State, Nyesom Wike reacted by saying the money belongs to the state.
Ubani, who was very irrated with the ongoing drama sorrounding the recovered money said: “Nigeria to some of us has become the ‘theatre of the absurd’.

“How do you explain certain things that happen here for which you can’t make any sense out of it?

“Take for instance the several billions of naira (in different currencies) discovered recently in someone’s house in Ikoyi Lagos, Nigeria.

“The rumor had it that the large sums of money belongs to former PDP chairman, Muazu who has denied ownership; the second accused, retired NNPC staff Mrs Nnamdi-Ogbue has also denied ownership.

Ubani talking about who could truly owns the funds, he added: “Suddenly, the story changed, that an Intelligence arm of the government, NIA has come forward to claim ownership of the money.”

Ubani said from what had been reported so far about the recovered money, here are some of the claims of NIA:
(a) That the money was approved for them by the previous government.
(b) That the money is meant for covert operation.
(c) That EFCC is embarrassing them (sister agency) by seizing the money that naturally belongs to them.
Ubani then asked the critical questions:
(1) Is the house where the money was found the office of NIA?

(2) Who is the true owner of that house where the money was discovered?

(4) Why is government money not in the bank but in a private home? Is government not in breach of its anti-laundering law by keeping such large sums in the house?

(5) How long has that money being kept there or was it not brought there recently that attracted the attention of the diligent whistle-blower?

(6) And so many questions (you can ask your own). I hope the hardworking and diligent whistle-blower will get at least 2.5 percent of his fees for a labourer is worthy of his or her wages?

He admonished Nigerians to ask their own questions over what he called a mind-boggling issue.
Ubani concluded: “Nigeria don tire me, no be small thing o! One thing is clear though that President Buhari should not mishandle this issue, it can stain him badly!”