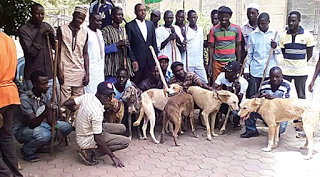 The Peace Hunters Association of Kaduna State has declared its involvement in ensuring peace in the state to the state government.
The association claims that it could stop the killings in Southern Kaduna if Kaduna State government gives them the adequate support, stressing that the attacks on innocent lives by the suspected terrorists in the region needs to be stopped.

Speaking to the Nigerian Union of Journalists (NUJ) during a press conference, the association said the objective of the team “is to restore peace in Southern Kaduna, Birnin Gwari and other other crises-ridden areas.”

Usman Muhammad, who is the treasurer of the association, insisted that the Kaduna State government should check the result gotten from the collaboration of Civilian Joint Task Force (CJTF) and Nigerian Troops in Maiduguri, it would see the enomous success achieved in combating insurgency disturbing the state.
Muhammad said hunters in Kaduna were ready to do their part terms of providing security for lives and property, using the recent establishment of vigilance groups by the Kaduna North residents, as well as Igabi and Kaduna South, as an example.
“Some communities engage the services of Katu-Dagora, a vigilance group established to secure lives and property. We want all other societies in Kaduna to borrow such a laudable idea,” he said.
The Kaduna state NUJ Chairman, Adamu Yusuf, commended the laudable efforts of the hunters at maintaining peaceful coexistence between indegenes and non-indegenes, securing lives and properties of Kaduna people. He promised that NUJ was ready to support any organisation that could bring and encourage lasting peace to Kaduna State.
CJTFHuntersKadunaNewsSouthern Kaduna
Share