A Kenyan woman, who is married and her lover who both got stuck while having sex were paraded in Kenya. 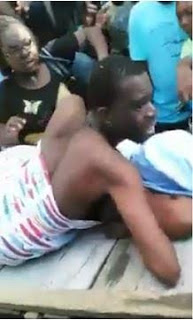 A cheating married lady and her lover were caught after they got stuck during sex in a hotel Explor-Inn hetole Bar.resto in Kenya.

Ebals News said that both of them, who could not control the pain in the embarassing and humiliating incident cried out aloud, thereby attracting neighbors who were supposed to come for their rescue but rather brought them out to parade them in the streets.

Rumour had it that the woman’s husband, who had been suspecting her before the occurence, must have secretly charmed her, an act which is popular among the Kenyans.

See the video below: