Xiaomi’s sub-brand Redmi is said to be working on a new smartphone called, Redmi Note 11 Pro 2023. As its moniker suggests, the phone is expected to be launched sometime in 2023.

Recently, the device has been making the rounds at various certification sites. It has already been spotted on FCC, EEC, SIRIM, and Google Play Console databases.

It is listed on the benchmarking site with an octa-core Qualcomm chipset, paired with 8GB of RAM. The processor’s motherboard is codenamed “sweet”, which is associated with the Snapdragon 732G chipset.

For reference, Snapdragon 732G is a fast mid-range SoC manufactured in the modern 8 nm process. It is an octa-core chipset with two ARM Cortex-A76 cores clocked at up to 2.3 GHz and six small ARM Cortex-A55 cores at up to 1.8 GHz. Interestingly, a recent Google Play console listing of the handset revealed it will be powered by a 3-year-old Snapdragon 712 chip. It remains to be seen which SoC will be used in this smartphone. 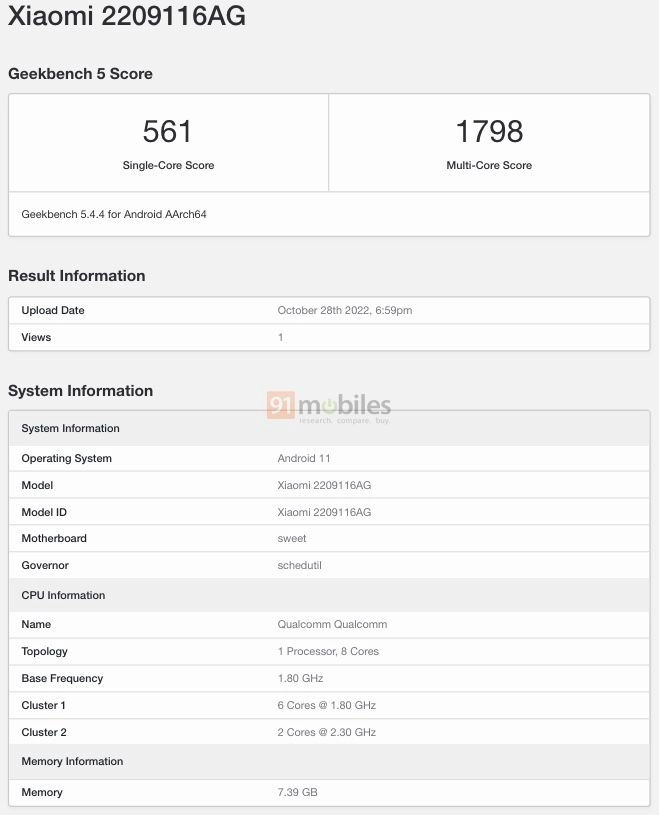 Geekbench doesn’t offer much more information about this smartphone’s specifications. We hope to learn more details about the device in the near future. Stick around for the updates.