Xiaomi, despite being a leading force in the tech segment, it’s also known in China as a big investor for startups. The company holds a lot of startups under its wings, among them we have China Car Custom (CCC). While Xiaomi is struggling with some barriers to entering the vehicle segment, one of its backed companies launched its first car. Today, CCC unveiled a new electric sports vehicle. 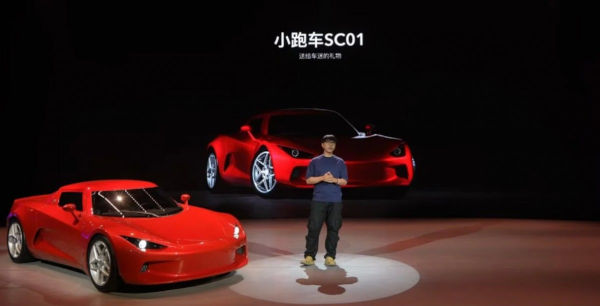 The new vehicle may not be the Xiaomi-branded dream of many but is still an interesting product for the segment. The new Electric sports car carries the SC01 model number. It’s a two-seater 2-door vehicle with two electric motors that deliver an output of 302kW (or 429 horsepower).

To put things into perspective, this is enough to push this interesting vehicle from 0 to 100 km/h in just 3.9 seconds. It’s a decent speed considering the car’s low weight of 1,300 kg. The overall experience will be quite fast.

It’s an attractive car with a sports design. The price is also very attractive at $42,000. That’s a decent price considering the car’s sports approach and electric nature.

According to the company, manufacturing will actually begin in 2023, and deliveries will start before the end of that year. However, the pre-orders are already being accepted. It may be a risky investment for some, but again, Xiaomi’s name is involved in the company, so that may be enough for some customers or potential investors. Worth noting, that all potential customers only need to spend $28 to secure their position in line.

Apparently, the CCC SCO1 takes inspiration from the Lancia Stratos 2010 concept car. The Stratos was 4.18 meters long and weighed around 1,270 kilograms. The SCO1 has 4.08 meters and weighs 1,300 kilograms. Interestingly, the Stratos accelerates in 3.5 seconds to 100, thanks to a 500 HP V8 motor. The SC01 is a bit slower, but you probably won’t realize that. The difference is that the SC01 is closer to reality.

Lancia’s project dates from 2010. However, back in that year, the EV doman was nothing but a dream. Now, it’s pretty much a reality – electric vehicles will replace gas motors in the next few years.

Talking about Xiaomi, it’s interesting to see the company’s involvement in a carmaker. The company plans to launch its own vehicles in the next two years. Lei Jun, the company’s co-founder, and CEO has been establishing his commitment to the automobile industry. So, it’s only a matter of time before more news appears involving Xiaomi and the car segment.

Xiaomi to unveil its first car prototype in August