At the Intel’s 2022 Innovation event, Samsung has showcased an unusual computer form factor that can be converted from a 13-inch to a 17-inch tablet by simply taking the display apart. 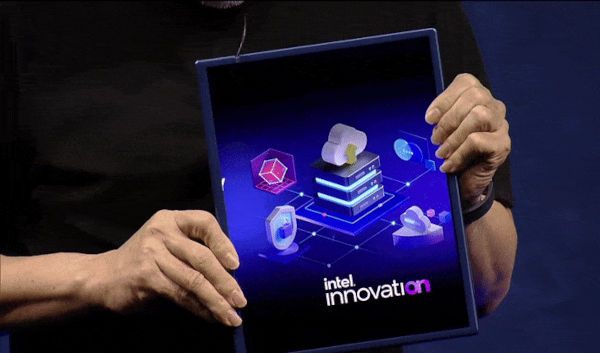 Samsung refers to it as “the world’s first 17-inch slidable display for PC” and it does just what it says on the tin. It has a rollable OLED panel. JS Choi, CEO of Samsung Display, appeared on stage at the Intel keynote to demonstrate the device, a 13- to 17-inch convertible PC.

The introduction of the 17-inch slidable laptop display begins around the 10:25 minute of the keynote highlights video for Intel Innovation below. The CEOs of Samsung Display and Intel repeatedly “stretch” and “close” the display to demonstrate how it functions. “Sometimes you need a larger screen,” JS Choi said, pulling the monitor apart from a small PC.

The rolling display section “slides” along rails in the frame to expand into a larger 17-inch panel from a space-saving 13-inch design instead than bending over a hinge like foldable OLED screens on Samsung phones. When the screen rolled back into a smaller form factor or reached its maximum size, there were a few audible thumps and a faintly perceptible wrinkle reflection at the separation notch in the frame that ran along the panel.

Samsung’s multiyear development into OLED panels with plastic substrates that can flex, bend, or roll appears to have culminated in this. It already has established product lines with foldable screens, like the Galaxy Z Fold4 but there aren’t any rollable display devices that are already on the market.

The slidable PC screen might be a sign of things to come, as the CEO of Samsung Display said that the company is collaborating with Intel to assess the potential benefits that such a form factor and the various interface options it opens could have for personal computing.