Your Phone app, which allows you to connect your Android smartphone with your Windows PC, has been update to become Microsoft Phone Link. On the program, a brand new interface and a much simpler and faster device control on Windows 11. 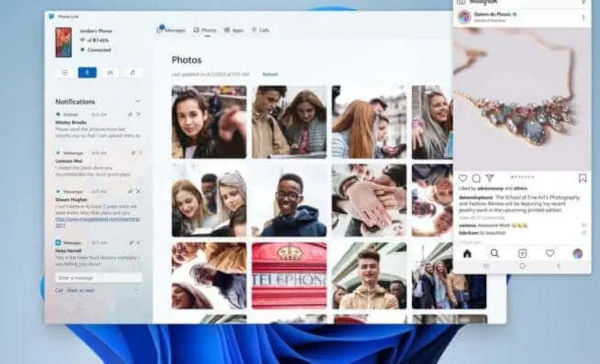 More than three years ago, Microsoft launched Your Phone, a Windows 10 native tool that, among other things, links your Android smartphone to your Windows PC. Thanks to this feature, users were therefore able to consult their text messages, photos and images, or even access notifications from their favorite apps directly on their computer screen, without having to take their phone out of their pocket.

Year after year, the Your Phone application has received many improvements; such as the possibility of extracting text from a photo saved in your smartphone, of replying to messages from the center of Windows notifications or of synchronizing several Android smartphones. Latest new feature, the ability to remotely configure your smartphone such as activating or not Bluetooth or volume control.

However, yesterday, April 1, 2022, Microsoft formalizes the end of the career of the Your Phone app. Don’t worry though, the app is just getting a makeover. Now called Microsoft Mobile Connected or Phone Link in the United States; the American company decided for the occasion to completely review the interface of its tool.

From the left column, users can, for example, easily access notifications sent to their smartphone. The new tabbed browsing also allows you to quickly enjoy all the important features, files and content of the phone. Finally, Microsoft announces that the device with Windows 11 will be much faster, by simply scanning a QR Code during the initial configuration with your new PC.