WhatsApp update: You can now add up to 32 participants on a call

The popular messaging platform WhatsApp has usual is in the headlines again. The developers behind the platform has yet again introduced a highly demanded feature to it.

The Meta-owned company recently confirmed that many new features like increased file sharing size, emoji reactions, and the ability to hide your last seen from specific contacts will soon be made available in the live build of the app.

Now, reports have emerged that WhatsApp has started rolling out a new update to the iOS version which includes support for 32-person calls, an overhauled call user interface, waveforms, and other improvements. The update is coming to the live build of WhatsApp on iOS. 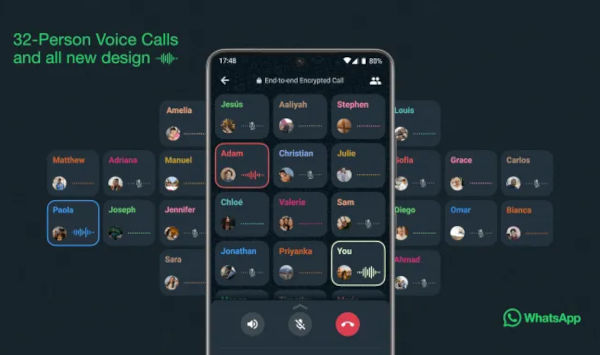 Till now, WhatsApp has allowed users to make group phone calls with multiple persons at the same time. A group voice conversation previously could accommodate up to eight people, but WhatsApp is now rolling out a new update that enables up to 32 participants.

Voice calls with up to 32 people would be possible in WhatsApp Groups. The platform has also modified the way participants are displayed on the screen to fit the additional members. Waveform images are used to label different WhatsApp users.

How to Make a Group Call on WhatsApp

Make a group voice call from the CALLS tab

Make a group voice call from an individual chat

Earlier last week, the chat app announced WhatsApp Communities, a feature which enable people to bring together separate groups under one umbrella with a structure that works for them.

This new feature comes with the update version 22.8.80 and is sized at 109.7MB for iPhones. Android users are also expected to soon get a similar update with these new features, however, it will not be available on the desktop client.