WhatsApp rolled out the ability to send disappearing media and self-destructing messages for the purpose of user privacy. However, it is actually not handling the so called privacy well as although the media in a chat is meant to vanish after a certain time, you can still save it to your smartphone. This is about to change as WhatsApp is now testing a new feature to curb this.

A recent report by WABetaInfo reveals that WhatsApp is testing changes to media visibility on both Android and iOS, which will no longer auto-save media in disappearing chats to a smartphone.

As per a shared screenshot, the media visibility and the “save to camera roll” options will soon be turned off by default on Android and iOS, respectively. This is to ensure that the purpose of vanishing media and messages is finally met and users can have a more private experience on the platform. 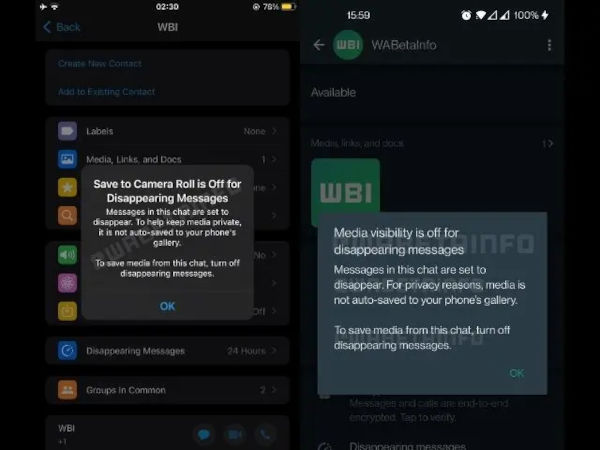 So, if the disappearing messages feature is enabled, media that is of the vanishing nature, won’t get saved to your device. Although, one thing to note is that you will still be able to save the media manually. And if don’t want to do it manually, you can disable disappearing messages to get the auto-save enabled.

This new feature is being beta-tested for both Android and iOS but there’s no word on when the feature will reach the general audience.

It comes in addition to the recent WhatsApp test, which restricts people from forwarding an already-forwarded message to more than one WhatsApp group simultaneously. This is being done to ensure that no one spams group chats anyone.

Twitter: A new way to ‘Unmention’ Yourself from Conversations is being tested