Twitter users on Android will soon have the ability to select text in a tweet. As shared by the popular app reverse engineer Jane Manchun Wong in a recent tweet, the company is working on introducing text selection to its Android app behind the scenes. 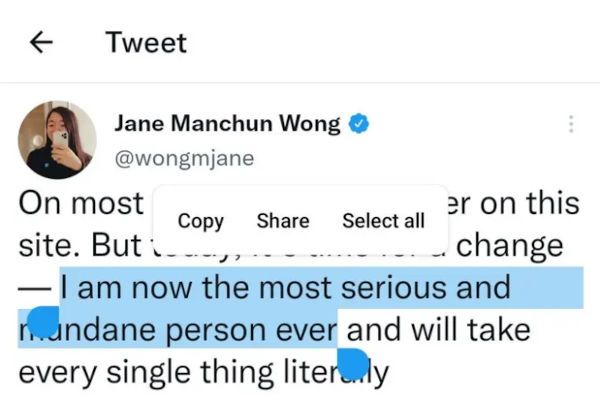 According to the tweet, Twitter could soon add the text selector to the Android app. In case you’re wondering, the feature has been available on Twitter’s iOS app for some time now. As you can see below, long-pressing the text will soon show you the options to copy the selected text, share the text, or select all the text in the tweet.

For the uninitiated, Twitter’s Android app doesn’t currently have the option to select and copy texts. If you want to copy a specific portion of text in a tweet right now from your Android phone, you will have to copy the tweet’s link, paste it into your browser, and select the text from there. Another workaround is to long-press the tweet to copy the entire text, paste the text into a notes app, and delete the irrelevant portions. Both of these methods feel redundant while Twitter could have directly added the feature to its app.

It is also possible to use Android’s overview selection feature to select text in tweets. Introduced in Android 9 Pie, the feature lets users select text from the app’s thumbnail via the recent apps switcher. However, the catch here is that it’s available only on Pixel phones, leaving the majority of Android phones in the dark.

At the time of writing this article, the aforesaid text selection feature is not live on the stable version of Twitter’s Android app. Now that the feature has been spotted in the wild, we expect the company to add it to the app in a future update, possibly over the coming weeks.