For a long time, Twitter users have been clamoring for an edit feature, and it seems that their desire may be rewarded eventually. Twitter recently announced that it is working on an edit button that will be available to Twitter Blue subscribers in the coming months. While Twitter hasn’t reveal much about the functionality or how it will work, thanks to a leak, we finally have our first glimpse at the edit button. 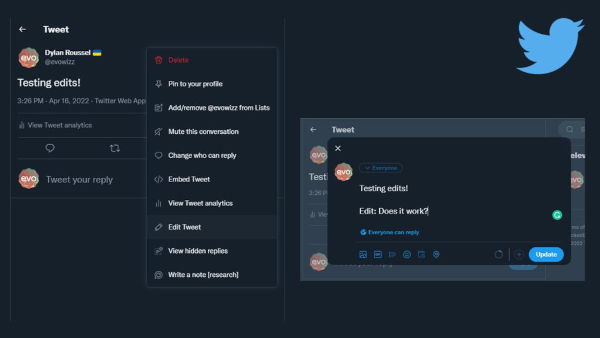 Dylan Roussel, a 9to5Google contributor, was able to enable the Twitter edit button on the web prior to the official release, giving us a sneak peek at the feature.

Uh oh! 👀@Twitter's edit button can already be enabled. It doesn't work yet, but I'll keep an eye on it! pic.twitter.com/7hyCAxsSym

Accessibility to the “Edit Tweet” option would be located under the three-dot menu at the top-right of your tweet, according to another reverse engineer, Nima Owji, who generously tweeted a GIF of the button in operation based on his insights. You can do things like remove a tweet or pin it to your personal account from this menu now, so it would be a proper place to amend a tweet as well.

I recorded a GIF from the upcoming #Twitter's Edit Button! pic.twitter.com/FPIRzzjUAF

It’s unknown whether Twitter will allow users to edit only a segment of a tweet or the whole content. It’s also unclear how many times a tweet could be edited and whether other users would be able to see what had been updated and when. We also have no idea how Twitter will handle retweets or quotes on modified tweets. Twitter hasn’t said when the edit button will be available for testing or when it will be released.