By TellForce Blog On Apr 8, 2022
Share
Join Us On Telegram 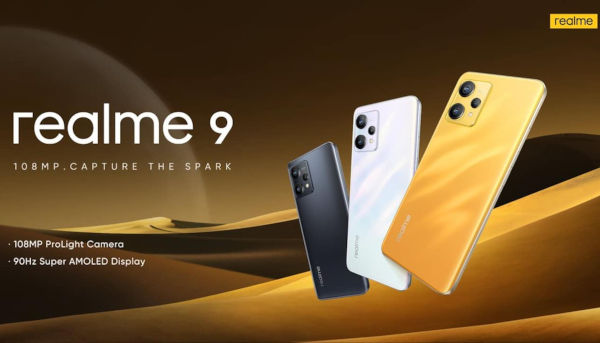 The Realme 9 4G has a similar appearance to the other devices in the latest numbered line with a flat back and curved edges. The smartphone features a Ripple Holographic Design on the back which shows different patterns when exposed to light at an angle. The back has a rectangular camera module and housed three lenses and an LED Flash. The device is also quite slim at just 7.99mm and weighs around 178 grams.

On the front, we get a flat 6.4-inch AMOLED FHD+ screen with slim bezzles around it. The screen offers a 90Hz refresh rate and 360Hz touch sampling rate. The display panel has 1,000 nits peak brightness and houses an in-display fingerprint scanner capable of measuring your heart rate. 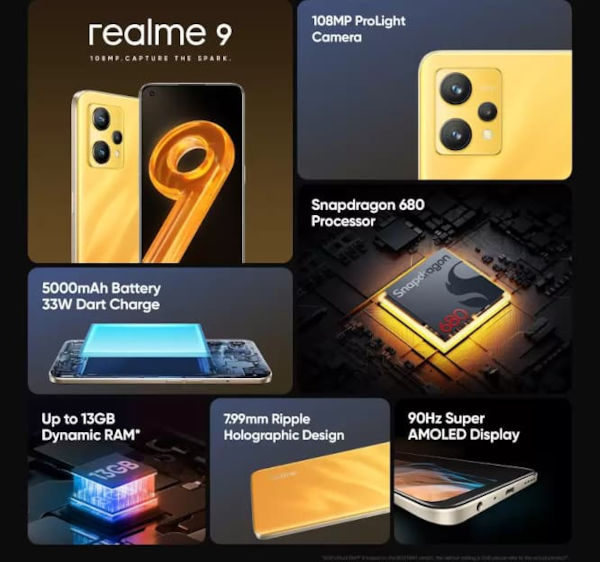 Under the hood, the Realme 9 4G is powered by a Qualcomm Snapdragon 680 chipset paired with up to 8GB RAM of ram and 128GB of UFS 2.2 storage. Realme also offers the Dynamic Ram feature on this device letting users virtually expand the RAM capacity of the device by up to 5GB. The storage of the device can also be expanded via a Micro-SD card with the capacity maxing out at 256GB.

As for the camera department, the back panel of the Realme 9 4G features a triple camera unit headlined by the new Samsung ISOCELL HM6 108-megapixel image sensor. This new sensor comes with Samsung’s new and improved Nonapixel Plus technology combining 9 pixels into one delivering sharp details in images and improved clarity in low light conditions. The 108MP ProLight Camera on the Realme 9 4G has an f/1.75 aperture, 6P Lens, and a FOV of 83.63°.

This camera is coupled with an 8-megapixel ultrawide snapper with f/2.2 aperture and 119.9° field of view and a 2-megapixel macro camera. For selfies, it is equipped with a 16-megapixel front camera with f/2.45 aperture.

Additionally, the company has also brought Street Photography Mode 2.0 to the Realme 9 4G giving users access to features like the popular 90s Pop filter, DIS snapshot, and peek and zoom.

It boots Android 12 out of the box with the Realme UI 3.0 skin applied on top. The device houses a 5,000mAh battery with support for 33W Dart charging. Realme has claimed that it only takes 31 minutes to achieve 50% charge capacity with the 33W fast charger.

The phone also has a 3.5mm headphone jack certified by Hi-res Audio promising an excellent listening experience. Connectivity options on the device include 4G LTE, dual-band Wi-Fi, and Bluetooth. 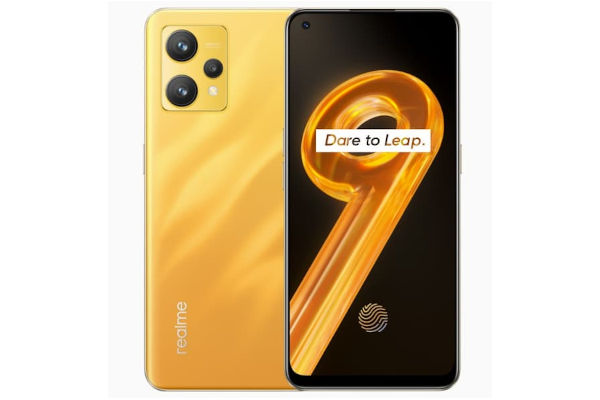 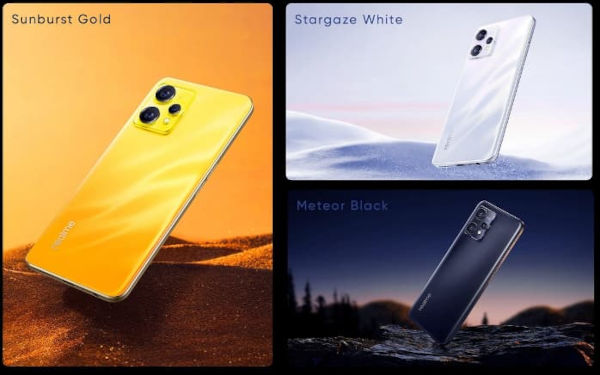 The first sale of the device will commence on April 12 at 12 noon. The device will be available for purchase on Flipkart and realme.com. The smartphone comes in three color options namely Sunburst Gold, Stargaze White and Meteor Black.