Google is gearing up to soon unveil the budget version of the Pixel 6 series smartphones, called the Google Pixel 6a. Last week, news emerged that the Pixel 6a could be announced at the Google I/O event in May and will later launch around July 28. And now, a new picture that features the Pixel 6a’s retail box has emerged, indicating that the launch might indeed happen sooner rather than later.

The box has an image of the Pixel 6a which features a similar design to the Pixel 6 and Pixel 6 Pro. The phone’s camera visor appears to be made out of glass but it could also be glossy plastic. According to previous rumors, the device will be made completely out of plastic.

Speaking about the camera visor of the device, looking closely, we can see a faint pill-shaped outline around the two cameras in the visor, which is in line with the previous renders of the device. The large LED flash on the right is also the same as featured in the renders and the device appears to indeed omit the microphone hole and the laser autofocus. 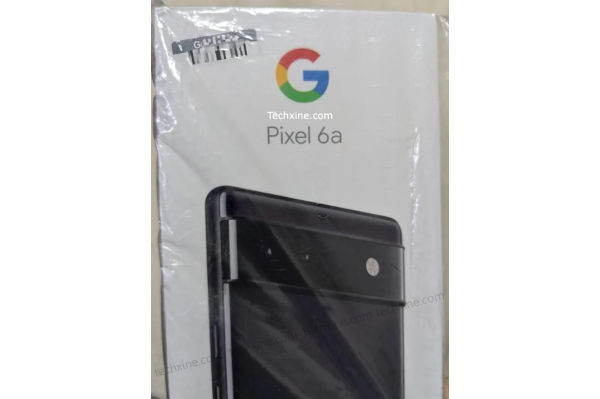 Coming to the specifications, previous leaks have indicated that the smartphone will feature a 6.2-inch OLED display and will feature an under-display fingerprint sensor. Similar to the Pixel 6 and 6 Pro, this one too will be powered by the Google Tensor chipset and have 128GB of internal storage.