As expected, the Nokia G21 smartphone’s Geekbench listing sheds more light on the upcoming phone’s specifications. First off, it reveals that the phone will pack an UniSoC processor under the hood. Moreover, the Nokia G21 secured 312 points and 1157 points in the single-core and multi-core tests, respectively.

Aside from that, the listing suggests that the phone will come with an octa-core UniSoC T606 processor with a frequency of 1.61GHz. Also, the processor will have an integrated Mali G57 GPU. 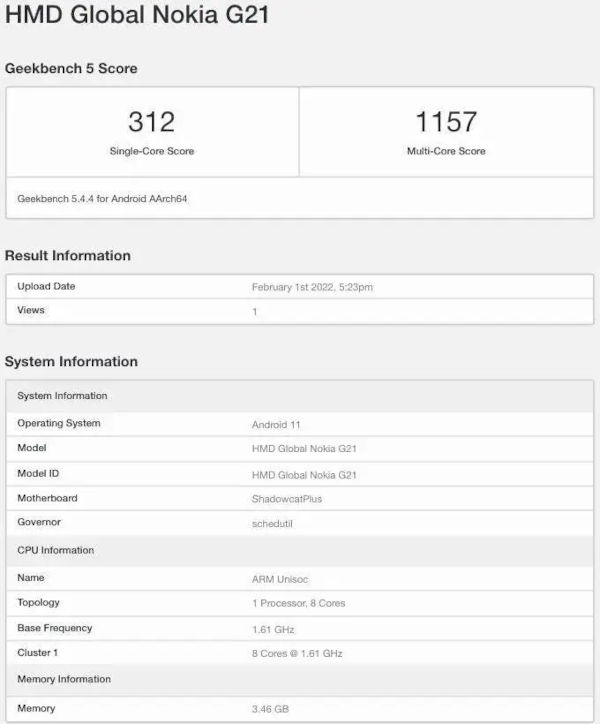 In addition to that, the phone’s Geekbench listing confirms that the phone will ship with 4GB of RAM. However, the company is likely to unveil more memory configuration at launch. Regrettably, the phone will come running Android 11 OS rather than the latest Android 12 operating system. Let’s check out the rest of the Nokia G21 specifications.

Upfront, the Nokia G21 will sport a 6.5-inch IPS LCD display with HD+ (1600X720 pixels) resolution, and an aspect ratio of 20:9. Moreover, this display could deliver a standard refresh rate of 60Hz. For optics, the phone will reportedly house three rear-mounted cameras, featuring a 50MP main shooter. The primary camera could be accompanied by a 2MP macro camera and a 2MP depth camera. Details about the front shooter are still few and far between. Nevertheless, leaks suggest that the phone could be drawing its juices from a 5050mAh battery.

For connectivity, the G21 will offer options like a 3.5mm audio jack, a micro-SD card slot, and a Type-C charging port. Aside from that, the phone will probably support Beidou, GLONASS, GPS/A- GPS, NFC, Bluetooth, Wi-Fi, 4G, and dual-SIM. Also, past leaks suggest that the phone will ship with 128GB of built-in storage capacity. This onboard storage could be paired with 4GB of RAM. The MicroSD card slot will come in handy for storage expansion. It is likely to launch in Black and Dusk color options.

More vital pieces of information about the Nokia G21 smartphone are likely to surface online when the device passes through other certification websites in the coming days.