Though brands such as Motorola, Oppo, and Huawei are already in the foldable market, they’re still yet to catch up to what’s Samsung’s forecasting for its foldable tech. At CES 2022, Samsung has showcased a few new foldable products like the Samsung Flex S foldable, Flex G foldable, Flex Note, and the Flex Slidable. 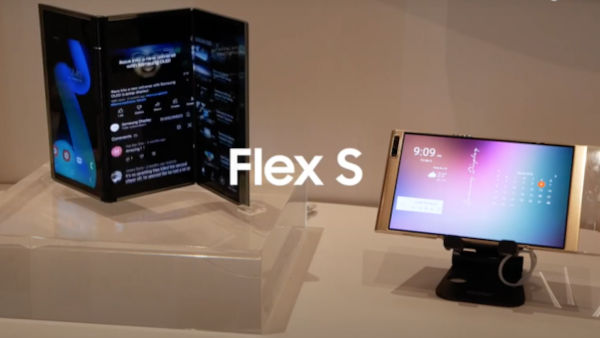 Samsung has showcased the “S” foldable and “G” foldable phones at the event. The Flex S fold is what it sounds like, the large screen would open us as a big tablet and it folds in a three-way design. As seen in the video below, when it’s unfolded, it forms the shape of the letter S.

On the other hand, the Flex G is an inward folding device. It again folds in three-way but it can be folded in such ways that the screen stays hidden, which is unlike the Flex S. It seems that the S fold design is better for large-screen devices, while the G fold is good for both the small displays and big screens.

Speaking about the Samsung Flex Note, it isn’t any other Galaxy Note phone device. Rather, it is Samsung’s take on foldable notebooks and laptops.

The Flex Note has a large screen and is a two-way folding design. As simple as it sounds, it will look like a laptop, but without a keyboard, however, you can use the rest of the part of the screen as a keyboard. Not just a keyboard, it can be tweaked to work as a drawing pad or as a timeline in video editing software.

The Flex Slidable is something similar to Oppo’s X 2021, offering great space of use and more screen real estate. Samsung reveals that the display of the Flex Slidable can slide out with a press of a button and can be used as a sidebar for accessing apps directly from the home screen.

While this foldable technology appears to be quite intriguing, it may take some time to see these in the market.