Following the recent launching of the Spark 8 series of smartphone, Tecno is now all set to launch a new device in India, dubbed Tecno Spark 8T.

The smartphone maker has officially teased this new smartphone launch in the Indian market through its Twitter account but has not yet revealed the date of launch. The teaser poster shared by the brand reveals that the phone will come in Cyan color, along with others.

Based on the teaser image, the phone will likely have a dual-camera setup on the back panel. The volume rocker keys, as well as the power button, are placed on the right side, which we generally see in other phones. 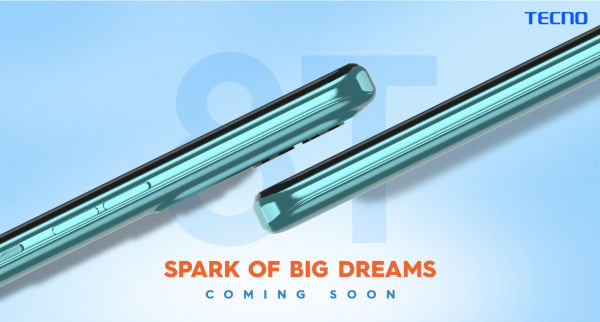 As at the time of writing, there’s not much known about the Tecno Spark 8T in terms of specifications and features but we expect the company to share more details in the coming days or weeks, as the launch date nears.

The most recent smartphone from the brand is the Tecno Spark 8 Pro launched in Bangladesh, which features a 6.8-inch Full HD+ Notch display with 2460 x 1080 pixels screen resolution. It is powered by the MediaTek Helio G85 chipset paired with 6GB of RAM and 64GB internal storage which is expandable up to 256GB.

It has a triple rear camera setup which houses a 48-megapixel primary sensor, a 2-megapixel shooter with an f/2.4 lens, and an AI lens with an f/2.0 lens. There’s also an 8-megapixel front camera with dual-LED flash.

The phone runs the Android 11 operating system with HiOS v7.6. on top and is powered by a  5,000mAh battery that comes with support for 33W fast charging.