A new report on the market share of brands for the global smartphone shipments for the third quarter of this year is out. This information reveals that Samsung Electronics is still in the lead. 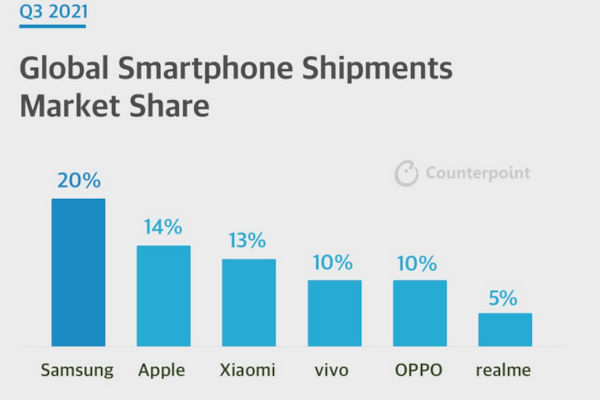 According to a Counterpoint Research report, the global smartphone market grew by 6 percent quarter on quarter but saw a modest decline of 6 percent year on year. During Q3 2021, the market shipped a total of 342 million units, which is down from 265.5 million from last year. However, the South Korean tech giant managed to retain its spot on the throne with a sizeable 20 percent market share during this quarter, shipping 69.3 million units.

Meanwhile, Apple came in second with a market share of 14 percent. The Cupertino based company shipped around 48 million units during this time, marking a notable 15 percent growth over the same period last year. Counterpoint credits this growth to the “persistent” growth of the iPhone 12 series and the launch of the latest iPhone 13 series. Similarly, Xiaomi followed close behind with a 13 percent market share in Q3 2021.

Although, its shipments dropped by 5 percent year on year and 15 percent quarter on quarter, hitting 44.4 million units in the third quarter of this year. The company saw the slight fall likely due to the ongoing component shortage and supply issues.

On the other hand, Realme saw its highest ever shipments in Q3 2021, shipping 16.2 million units. This marked a record quarterly performance that arrived despite the globe suffering from a lack of semiconductors.

15 Habits that could be hurting your business relationships