Following the October release of Android 12 on the latest Google Pixel devices, the TV version of Android 12 is finally out of Beta testing. On November 30, the official release of the Android TV 12 was announced for developers, indicating that the update may soon go live on your smart TVs.

New features That made it to the stable Android TV 12

The Android TV 12 focuses on improving user interface elements when viewing the interface on the 4K TVs. Till now, the main interface was only rendered in 1080p and when selecting something to watch, it switches to 4K, causing some “lag.” 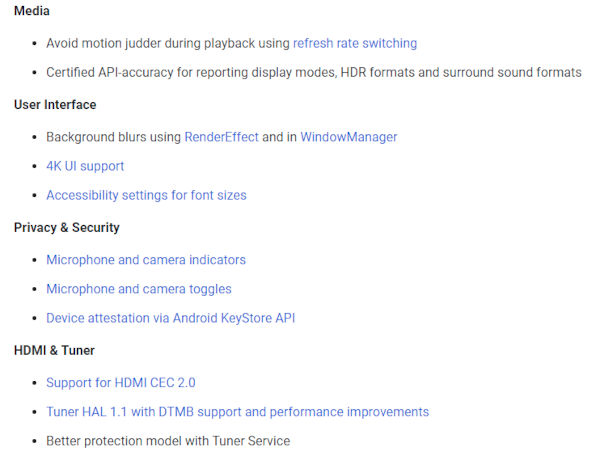 The new update brings new background blurring to “easily enhance the visual separation of different UI layers.” There’s also a new refresh rate setting for a “smoother viewing experience.” Applications can also check playback settings and change the frame rates based on what’s being viewed. Google is also including support for HDMI CEC 2.0.

Another significant feature coming with this new update is related to privacy control. Google is now implementing microphone and camera indicators that appear on TV. These are the same indicators found on smartphones when an app uses a camera or microphone. This feature is for those who don’t want the microphone or a connected camera always being active and will grant complete control over them.

Beyond Google’s announcements, we did find a few more minor tweaks to Android TV and Google TV that will come with Android 12. The biggest of these is a feature called “Quick Connect.” Available under the “Network and Internet” section, Quick Connect for Android TV generates a QR code that mobile users can scan. The scanned code on the phone will lead to the Android TV’s Wi-Fi connection page allowing users to handle the text input from the mobile itself.

If you are interested in trying out the Android TV 12, You’ll need an ADT-3 — Google’s development box for the platform — to get it up and running today. The update is available for manual download here.

Unfortunately, there’s no word of this update hitting Google’s Chromecast dongle, which is still running Android TV OS 10 and hasn’t seen any updates in a few months.