Last week, a report emerged that Xiaomi may hold a launch event on Dec. 12 in China to unveil the Xiaomi 12 and Xiaomi 12X flagship phones. Now, latest information is revealing that the Chinese manufacturer may launch the Xiaomi 12-series by the end of December.

The Xiaomi Mi 11 5G that was launched December last year was the first brand to launch a Snapdragon 888 SoC powered phone. However, a reliable tipster claimed that this year Xiaomi will not unveil the first Snapdragon 8 Gen1 flagship phone.

A screenshot of an internal document of Xiaomi China seems to have appeared on Weibo. It shows that the company will be holding a press conference on Dec. 28 to announce a new product. This indicates that the rumored Xiaomi 12 and Xiaomi 12X may go official on Dec. 28. 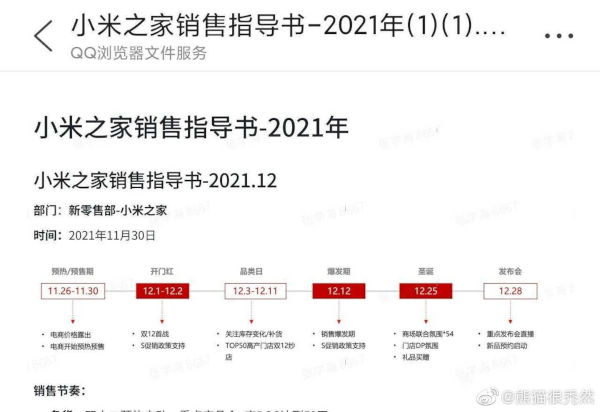 Even tipster Digital Chat Station has claimed that Xiaomi’s product launch conference is scheduled for the end of next month. He added that there is a probability that Xiaomi may not be the first brand to launch Snapdragon 8 Gen1 powered phone. This suggests that the Moto Edge X featuring the Snapdragon 8 Gen1 may go official before the Xiaomi 12 lineup.

Reports have revealed that the Xiaomi 12X will be driven by the Snapdragon 870 mobile platform, whereas the Xiaomi 12 will be equipped with Qualcomm’s new flagship SoC. Both models are expected to arrive with a curved edge AMOLED display that offers a Full HD+ resolution, a 120Hz refresh rate, and an in-screen fingerprint sensor. The Xiaomi 12X is expected to house a 6.28-inch display.