WhatsApp has been reportedly working on a new version of the application for computers. A lot of people these days already use the app on the PC, but it is an adaptation of WhatsApp Web. Now, Meta’s messenger should reach Windows and Mac with a new interface bringing exclusive features. 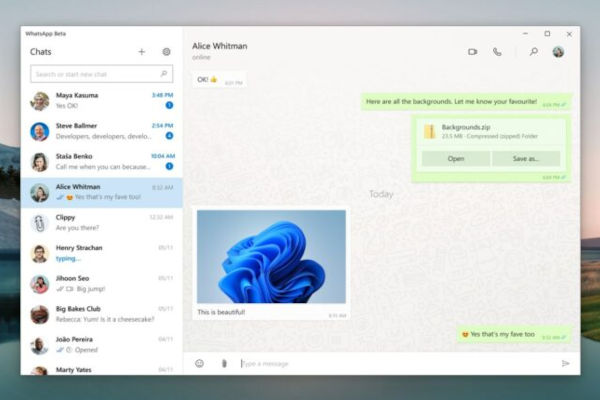 Windows To Get New WhatsApp Applications With New Features

The information and the first records of the new software came from the profile @ALumia_Italia. For Windows, the new WhatsApp app leverages the Universal Windows Platform (UWP) to deliver a more integrated user experience. In addition to the PC, users will be able to install the app even on Xbox.

Being UWP based, the interface looks native to Windows. You can also see inspiration from Skype. Contacts are located on the left side, while the chat is in the center. At the top, there is a gear that groups these menus: general, account, chats, notifications, storage and help. Even closed, the app continues to display notifications.

In the image, we can also see that there will be a unique drawing resource to be done and sent by the application itself. In that case, it may work better on Windows devices with a touch screen.

Another good news is that the new feature already supports multiple devices. With this, just as Telegram already does, the new application will not depend on the smartphone to work.

Meta (formerly known as Facebook) is also beckoning to Mac owners. According to WABetainfo, a portal famous for revealing the main news of the messenger, the macOS version is on its way. This should happen after the launch of the iPad-only app.

In terms of availability, there’s no date for WhatsApp to release the apps.