It is quite common to find technology companies swapping from one area of interest to another. Xiaomi started as an internet company but it is now a major smartphone manufacturer. Google is an internet and software giant but it now has its own Pixel smartphones. Even manufacturing giants like Samsung and Apple did not start off as mobile phone companies. 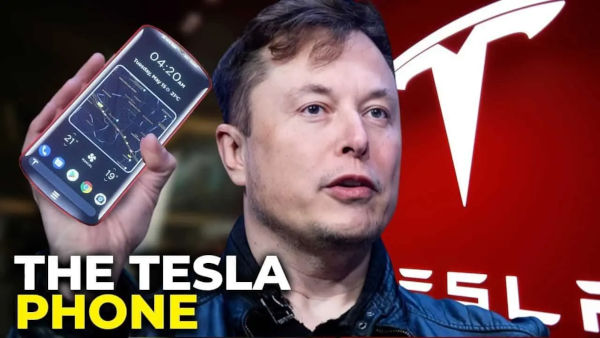 While Samsung’s first device was a television, Apple’s first product was a computer. Chinese manufacturers like Huawei and Xiaomi are now in the automobile industry. So, why won’t Tesla, an automobile company produce its own smartphones?

Actually, Tesla is working on its own smartphone and from the latest renders, it feels like a gaming smartphone. Recently, some renders of Tesla’s upcoming smartphone hit the web. The renders show the rear of this smartphone. The rear of this device has a sky-blue bar separating the larger blue bottom from the navy blue top. The sky blue bar hosts the regular Tesla “T”-like logo. Imagine Tesla’s logo on a smartphone, feels like a gaming device for me. However, Tesla’s first smartphone will probably not be a gaming device. Furthermore, on the top rear of this device, there are three horizontal openings probably for the camera sensors. This suggests that the device will use a triple rear camera setup. The rear camera design is not common but it is also not spectacular.

The design of this smartphone is very distinctive in appearance, breaking through the conventional design of existing mobile phones. The shape of the mobile phone is eye-catching. This mobile phone is different from the common design in the market now. It feels very cool and has a premium appearance. The four edges and corners of the device are distinct, and the fuselage appears to be designed with a variety of metal materials, giving it a mechanical feel. For those who know Tesla well, sighting the logo on the rare will give you a “Car Product” first impression.

There are reports that this device may be named Model Phone, continuing the naming characteristics of Tesla products. There are also rumors that Tesla’s mobile phone will come with a 108MP main camera, a 4K-level screen, a Snapdragon 898 processor, and a storage specification of 2TB. The configuration is very good. However, with such a high profile, the price of the smartphone may not be friendly.

If Tesla eventually launches this smartphone, it will have a lot of work to do to convince the market. In this regard, it is also possible for Tesla to develop mobile phones, after all, there are certain financial and technical conditions. If Tesla really launched a mobile phone product, would everyone choose to buy one?

Amazing! Next TECNO Camon To Feature A 60 megapixel Camera

Specs and Prices Of The iPhone 13 Series Revealed