Samsung was one of the first brands to launch a foldable smartphone in the market but it wasn’t the first one to actually release a device with a foldable display. Royole was the first to hit the market with its FlexPai lineup of foldable handsets. Now, information is out about its upcoming third iteration of this series. 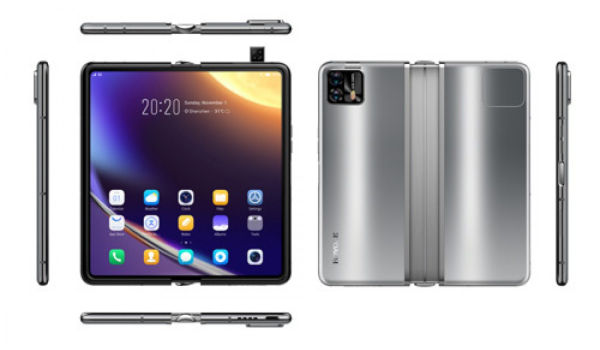 The popular tipster Evan Blass (@evleaks) shared a new image that was a leaked render of the upcoming FlexPai 3 – the successor of the FlexPai 2. Looking at the image, it appears that the Chinese smartphone maker has made major changes in design for the next generation of foldable handset. The device now features a dedicated rear mounted camera module and even feature a pop up selfie camera as well, opposed to the single vertically stacked camera module on the side of the display that acted as both the selfie and rear shooter.

How about this? (Royole F3) pic.twitter.com/Va0L5PuPkP

Although, the rear camera module now only includes two sensors, which is a downgrade from last gen’s four image sensors. Furthermore, it appears that the device will be an outward folding device, similar to its predecessor, as we can also observe a square shaped area that is bent inward in the other half of the rear panel. This would likely help in accommodating the camera module’s bump when in the folded state.

Currently, no finer details regarding the smartphone yet. However, the Royole FlexPai 3 was also recently spotted on TENAA Listing (Via XDADevelopers) that revealed some key information. According to listing, FlexPai 3 will boast a 7.2” unfolded screen, 3,360 mAh minimal battery charge, Android OS-based UI and 5G connectivity.

This device’s listed dimensions come in at 147.1 x 138.8 x 7 mm. It also has a side-mounted fingerprint scanner and an off-centered USB-C port on the bottom.

ALSO READ:  Motorola RAZR Foldable Phone Will Be Launched At The End Of 2019
Advertisment