A couple of months ago, Realme entered the tablet market with the announcement of the the Realme Pad. The slate brings great specs at an affordable price but was limited to the Indian market. Now, the Realme Pad has officially reached the European markets. 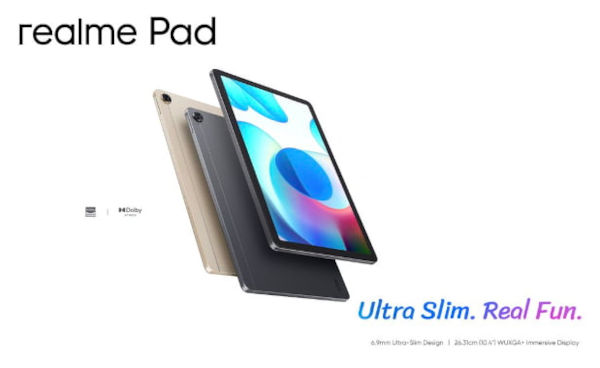 The new tablet is reaching the country as Realme is starting its Black Friday deals in the country. So far, only the Wi-Fi model made its way to the old continent, so the LTE model will still be exclusive to the Indian market.

The tablet is available only in the Gray colorway. The wearable is available at a regular price of €240, but some stores list it as €260. With the right discounts, you can bring the price down to €200. Worth noting that this price is valid until November 29.

According to Realme’s Online Store info, the shipping will be limited to Belgium, Germany, Luxembourg, the Netherlands, and Portugal. The company is doing flash sales every day from today until the 29th. Today’s offerings are Realme GT with 8 GB of RAM and 128 GB Storage for just €250.

There is also the Realme Watch 2 Pro with a discount of 20 Euros and a Realme Buds Air 2 for just 10 Euros less. For now, there is only a limited number of units available at those prices. Once they go out of stock, then they will return to the original prices.

In terms of specifications, the Realme Pad has a 10.4-inch IPS LCD screen with a Full HD+ resolution of 2,000 x 1,200 pixels. The panel has a 5:3 aspect ratio and a pixel density of 224 pixels per inch. Under the hood, the chipset carries the MediaTek Helio G80 platform. It’s a 12 nm processor with 2 x ARM Cortex-A75 cores clocked at 2.0 GHz plus six ARM Cortex-A55 cores clocked at up to 1.8 GHz. The device has a Mali-G52 MC2 GPU and offers support for micro SD cards. 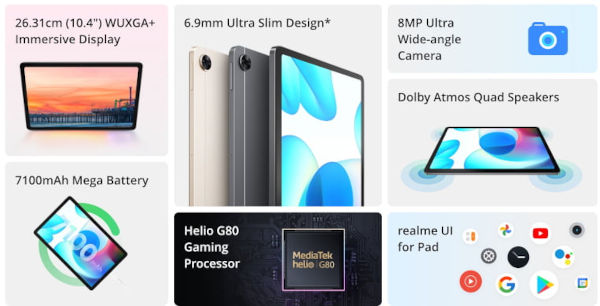 The Realme Pad draws its powers from a fairly large 7,100 mAh battery with 18 W fast-charging support and reverse charging. The multimedia department gets powered with a Quad Speak system. In terms of optics, there is a primary rear camera with 8 MP and also a selfie snapper with 8 MP resolution.