Microsoft announced the Surface Duo 2 phone back in September with the device bringing several improvements over the first-gen Surface Duo. YouTuber JerryRigEverything has published a durability test video that highlights the features of the device. 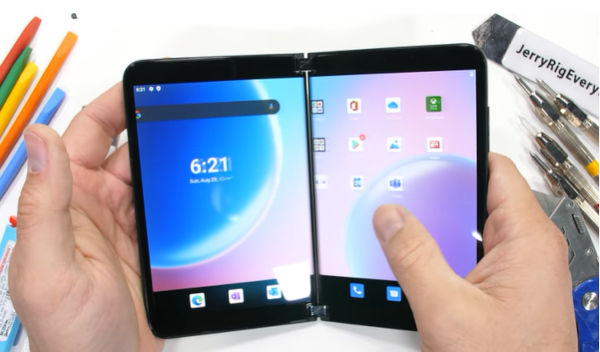 The video in question shows the Surface Duo 2 being put through some rigorous tests in what has become Zack Nelson’s usual routine.

The new Microsoft smartphone has a foldable screen setup although its design is seemingly different from the foldable devices we have come to see like the Galaxy Fold2. The Surface Duo 2 has two screens separated by a hinge and bezels, but neither of the screens can fold. The hinges remain a delicate underbelly of foldables and the Surface Duo 2 has been put through some strong tests in this regard. The two screens are capable of taking a direct flame from a lighter without any visible damage.

The phone is also well-kitted in surviving bend testing, although the part opposite the hinge is prone to flexing which is a drawback. The sides of the Surface Duo 2 are plastic leaving the device prone to scratches. However, its screens are covered with Gorilla Glass Victus, with a level 6 rating on the Mohs hardness scale.

Microsoft will hope that the Surface Duo 2 will get a better run and reception than its predecessor. It however remains to be seen how it will fare with the foldable flagships already having a ball like the Galaxy Z Fold3 and Galaxy Z Flip3. Potential users are at least assured of some levels of ruggedness for the Surface Duo 2.