Microsoft has announced the integration of Mesh, the next step in the evolution of Microsoft Teams. The Mesh will be an interactive platform for virtual experiences inside the Teams platform. This announcement comes just days after Facebook reincarnated to Meta and revealed its future vision for a metaverse. 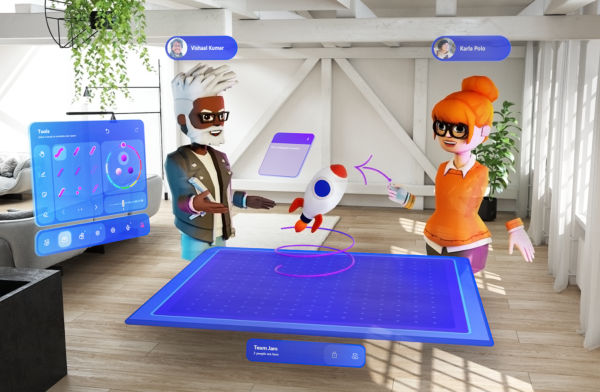 Microsoft Mesh seems to be the next step in AR technology. Some new features revealed by Microsoft consist of a ‘Together Mode’ which is designed to create a virtual avatar of a person that will aid in better engagement during meetings. The idea was inspired after seeing so many users experience pandemic fatigue due to excess screen time.

Microsoft Teams will be equipped with new 3D avatars to facilitate a metaverse environment, which won’t require a VR headset. These avatars can represent the user, both in 2D and 3D meetings. This provides the user with the option of not turning on the webcam if he or she doesn’t want to.

“It’s not binary, so a person can choose how they want to show up, whether it’s video or an avatar, and there’s a variety of customized options to choose from, as to how one wants to be presented in a meeting,” says Katie Kelly, principal product manager for Microsoft Mesh.

Furthermore, according to Katie Kelly, these technologies, or should we say prototypes work better with VR or AR headsets, these features will be accessible by most of the devices. Also, because it is based on realistic experiences, the human presence such as talking, eye contact, and reactions are going to be important.

This upgrade also focuses on removing language barriers by including a built-in app translation support, which will be a blessing in the post-pandemic scenario wherein companies have remote workers across the globe. The great news is that Microsoft has promised that these features are going to be accessible as soon as early 2022.

The addition of this feature will enable the corporations to model their own virtual spaces, or metaverses inside Teams. This seems to be Microsoft’s own metaverse.