One of most interesting features in Windows 11 is Android app support but it’s yet to be available in the stable version of the new Windows that is currently rolling out. However, Windows Insiders have started receiving the new feature since yesterday and can now get to experience it. 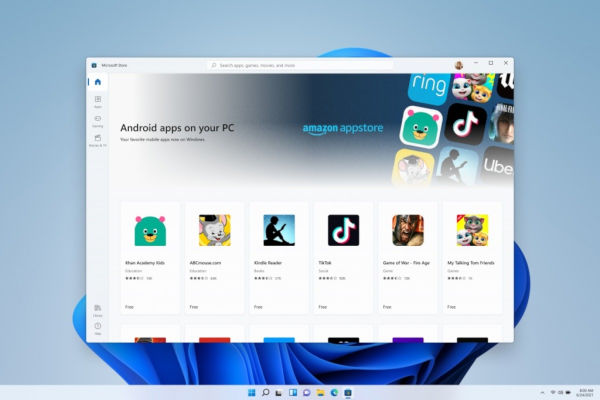 In a recent official announcement, Microsoft has announced that a preview of the Android apps experience is now available to users on its Windows Insiders Program. The tech giant says that the feature can be tested by Beta Channel users in the United States on eligible devices powered by Intel, AMD, and Qualcomm platforms.

The new Windows OS can run Android apps thanks to a component called Windows Subsystem for Android which powers the Amazon Appstore. The subsystem includes the Linux kernel and Android OS based on AOSP version 11

Microsoft says users will be able to run apps side-by-side, pin them to the Start menu or Taskbar and interact with them using a mouse, stylus, or touch input. You will also be able to switch between Android apps and Windows apps/programs using Alt + Tab and Task view.

Notifications from Android apps will also be visible in the Action Center and you can share your clipboard between a Windows app and an Android app. Microsoft also says that many of its Windows accessibility settings apply to Android apps but it is working with Amazon to improve them.

At the moment, there are 50 apps available for testing including popular games such as Lords Mobile, June’s Journey, and Coin Master while kids can learn and play with Khan Academy Kids and Lego Duplo World. The Kindle and Comics apps are also available.