WhatsApp has yet again introduced a new functionality to its group calls. Users can now join ongoing group calls using a newly introduced button. The Facebook-owned company said the feature is “a new spontaneous way to connect with their family and friends groups.” 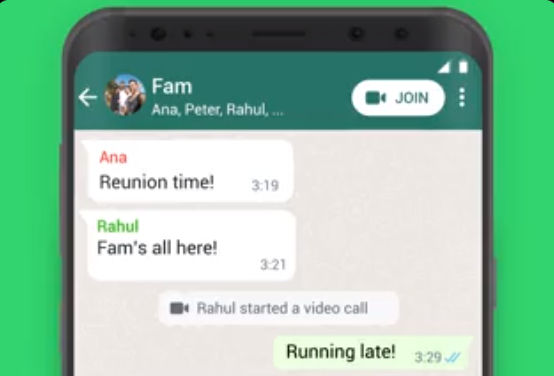 The new button means you can call a WhatsApp Group (or join a call) from the chat itself. And the redesigned notification will now say the Group name, rather than listing participants.

Need to pop in and out of a group call? Easily join ongoing calls right from your group chats! pic.twitter.com/OtOHKXh5Ev

Only people in the Group will be able to join the call. The call will also appear in the chat list, so you can quickly and easily see which groups have ongoing calls.

If you can recall, back in July, WhatsApp added a joinable call even when the call is in progress. The new button now makes it easier to join directly from the chat tab.

“We are making it easier to connect spontaneously with your groups,”

“Join ongoing calls with your groups anytime, effortlessly, and directly from the chat view with one click.”

WhatsApp is redesigning the Picture-in-Picture mode with a new control bar that allows you quickly to pause or resume the video and more, like opening the video in full-screen mode or closing it.

Initially, the control bar had to be available for videos shared from YouTube, but it seems that WhatsApp is now rolling out for any supported video.

The new update is rolling out already, so update your iPhone’s App Store or the Google Play Store on Android.

ALSO READ:  WhatsApp Will Permanently Ban You If You Are In A Group with Suspicious Name
Advertisment

How To Transfer Credit On Airtel, Glo, MTN & 9Mobile (nee...