The much anticipated Nigerian digital currency, e-Naira has finally been officially unveiled today at the country’s State House in Abuja. 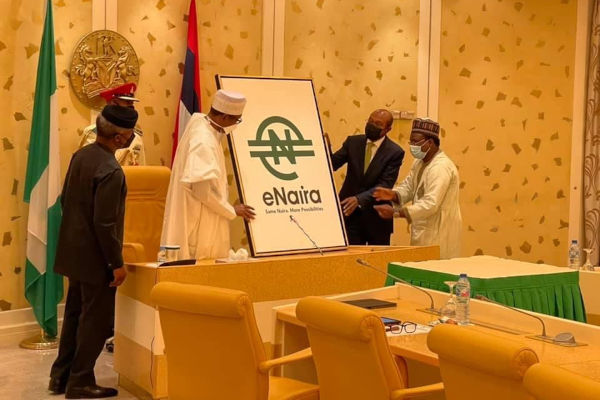 The Central Bank of Nigeria (CBN) had earlier announced that President Muhammadu Buhari will on Monday (today) unveil the e-Naira.

The apex bank had on September 30 suspended the launch of its digital currency, called e-Naira. The suspension of the launch was announced by CBN spokesman Osita Nwanisobi while speaking to newsmen in Abuja.

According to the CBN spokesperson, the rollout was suspended to allow other events slated for the country’s 61st independence anniversary to take place.

But in a statement on Saturday, Osita Nwanisobi stated that the e-Naira is now expected to be activated on Monday by the president. The CBN Director stated that the launching would take place at the States House, Abuja.

Coming to fulfillment, President Buhari has on Monday, declared the official use of the new era electronic version of the nation’s local paper currency.

Present at the unveiling were the Vice-President, Prof. Yemi Osinbajo, and the Central Bank of Nigeria (CBN) Governor, Godwin Emefiele.

At the launch on Monday, Emefiele, said 500 million eNaira ($1.21 million) has already been minted.

The e-Naira will hold equal value with the paper currency and will be issued by the CBN.

Nigerian authorities say the currency is not intended to replace cash but will function as a safe and efficient alternative means of payment.

The e-Naira will be a Central Bank Digital Currency (CBDC), issued by the government, and it will have the same value as the paper, or fiat, currency.

It is understood that CBDCs is far different from cryptocurrencies in being regulated and therefore subject to banking laws. They are issued by a central authority and are therefore trusted by traders. The CBN issued its regulatory guidelines for the e-Naira on October 1.

The e-Naira value will rise or fall in relation to the dollar in the same way as the fiat currency.

What Is GMS and Xiaomi Phones Is Not Supporting It?