In a bid to prevent the ban of users unjustly on its messenger, WhatsApp is testing a new feature which offers ban users an easier way to appeal the ban. Banned accounts now have the option to submit a request for review within the app in order to appeal the unfair sanctions.

The feature allows sending a report to WhatsApp directly from the app. The user can include a description of what happened before being banned and further details.

Users can be banned from using WhatsApp and there are several reasons why you can be banned. Just use their service normally and you’re fine, but there may be situations out of your control (for example you are added to an illegal group without your consent) and you’re banned. 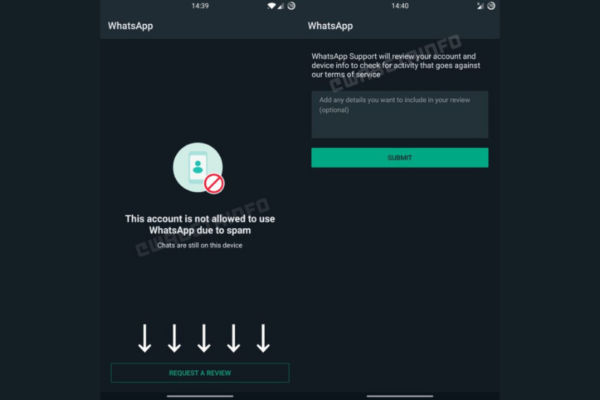 Banned users will be shown a page stating that “This account is not allowed to use WhatsApp” with a reason for their suspension.

The addition of the ban review system will include a button on this page to “Request a Review.”

Once selected, users will be able to provide additional information relevant to their appeal.

Users will be informed by WhatsApp when their account has been reviewed — this can take up to 24 hours. Chats on the device will remain intact.

If the review process finds that the user was unfairly banned, WhatsApp will restore the account.

While the feature is still in development, we expect it to rolled out in the coming weeks.