Popular micro-blogging giant Twitter has confirmed that it will soon allow users to send Bitcoin and Ethereum to other Twitter users via Tip Jar. Earlier this year, the social media giant hinted at introducing a feature that will let users send a monetary tip to their favorite creators or personalities. 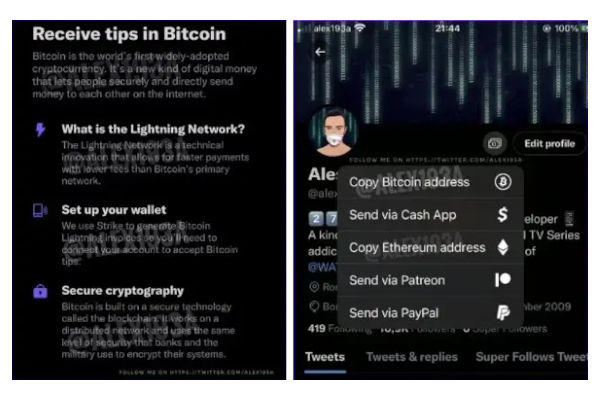 First spotted by reverse engineer Alessandro Paluzzi, the upcoming Bitcoin payments support for Twitter’s Tip Jar is currently under development. The tipster shared what the new feature will look like in a recent tweet.

Users who have already enabled the Tp Jar feature will be able to add their Bitcoin and Ethereum addresses to their profiles to receive payments from their followers.

Twitter will use the Lightning Network, which is an alternate payment protocol to Bitcoin’s primary network, for the transactions. The company is using Strike’s services to generate the Bitcoin Lightning invoices to enable faster payments and lower transaction fees.

Now, not long after Paluzzi shared his findings, Kayvon Beykpour, the product lead of Twitter, retweeted Paluzzi’s tweet along with a ⚡ lightning emoji and a “soon” emoji. So, we can safely say that Twitter is indeed working on the feature, and will soon add support for Bitcoin to its Tip Jar feature. Currently, the feature supports payment services such as PayPal, Venmo, Cash App, and Patreon.

As per the availability, Twitter has not mentioned a specific timeline for the release of the feature. However, we can expect the micro-blogging giant to roll out the feature sooner rather than later.