WhatsApp has today started rolling out a new disappearing feature for photos and videos. You can now send ‘View Once’ photos and videos through the messaging app, and that can only be seen once. 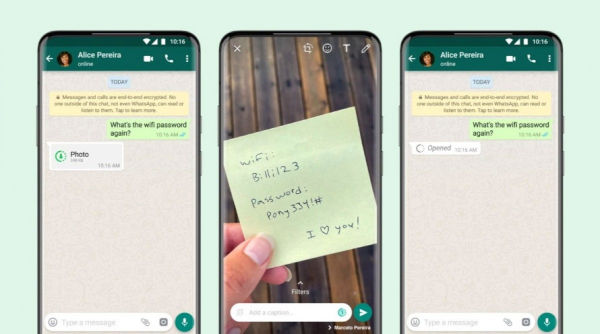 WhatsApp started testing the feature late June but it’s now rolling out to all users.

For example, you might send a View Once a photo of some new clothes you’re trying on at a store, a quick reaction to a moment in time, or something sensitive like a Wi-Fi password.

The way it works feels a lot like it does on Instagram. The recipient needs to tap the “Photo” or “Video” button to see the image or video. Once closed, the video or image won’t be accessible anymore.

Kindly note despite the introduction of the new feature, this does prevent recipients from taking screenshots or record their screen while opening a View Once photo or video.

In addition, WhatsApp won’t notify the sender when the image was a screenshot or recorded. View Once media won’t be visible to WhatsApp since it is sent with end-to-end encryption. If the content is reported on, though, WhatsApp will be able to see the content.