Earlier this month, Samsung launched the Galaxy Z Fold3 as its third-generation foldable phone. The South Korean company has touted significant improvements in the build quality of the device such as a stronger aluminum frame, IPX8 water-resistance rating, Gorilla Glass Victus, and a display that it claims is 80% more durable than the last generation. 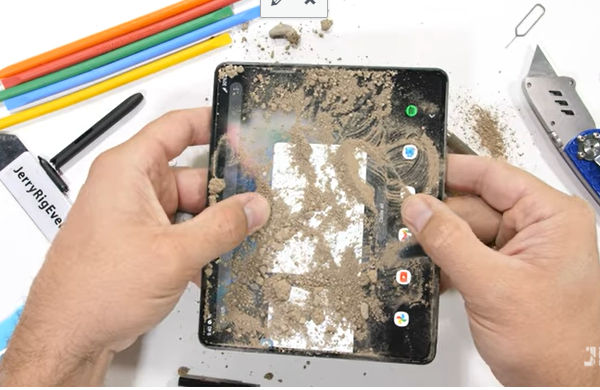 To confirm if these claims are true, popular YouTuber, Zack Nelson, of the YouTube channel, JerryRigEverything, put the Galaxy Z Fold3 through his famous durability test.

The result of the over 11-minute long video is that Samsung’s new foldable is actually better in terms of its build quality.

The Galaxy Z Fold3’s cover display and rear panel, which are protected by Gorilla Glass Victus, scratch at level 6 on the Mohs’ scale of hardness. However, the inner display that now houses an under-display camera, is still pretty soft as it scratches at a level 2. Your fingernails will even leave noticeable marks on the surface if you apply enough pressure. However, you don’t have to worry about the S Pen Fold Edition leaving permanent marks on the screen even if applying pressure when writing.

One of the upgrades Samsung touts is the new Armor aluminum frame. While the paint on the metal does come off when scratched with a knife, the strength of the frame is best tested when dropped which didn’t happen in the video although

The Galaxy Z Fold3 has an IPX8 rating which means while it will survive immersion in water, it isn’t dustproof. If you are wondering how this is possible, it is reported that what Samsung did is to give the phone’s internal sockets with an oleophobic coating that keeps water out rather than with the use of rubber seals. Zack does put the phone through a dust test and the Galaxy Z Fold3 does a good job in not getting dust into the hinges.

Samsung has sure made an impressive device and it is impressive to see there is a significant difference when compared to the first foldable it released in 2019.