Samsung recently launched the Galaxy Z Flip3 alongside its other foldable smartphone- Galaxy Z Fold3. Now, a teardown video by PBK Reviews has emerged, providing some great views about the internal workings and make-up of the Z Flip3. 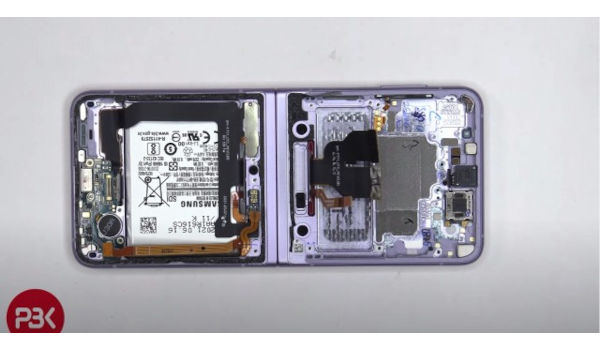 The Galaxy Z Flip3 sports a foldable design and is one of the very few phones that have the foldable feature. The teardown started with the heat gun applied to the open glass covering of the screen. The elaborate video which extended up to 9 minutes provides the clearest glimpse yet of the Galaxy ZFlip3.

Among the features highlighted in the video are the cover screen (1.9 inches wide), a 930mAh battery (there is a second batter one on the inside of the device), and several other components that are visible from the back opening.

The display of the Galaxy Z Flip3 is foldable, and this is shown clearly in the teardown video. The flexible display of the Z Flip3 sits at the top of the new and revamped folding hinge. The delicate internals framework means that the Galaxy Z Flip3 is not a smartphone to be disassembled by just any person. You must have the necessary tools as well as the expertise. The repairability score is put at 4/10.

The Samsung Galaxy Z Flip3 internals also include a 2370mAh battery, a sizeable graphite pad for optimal heat management, the speaker assembly, and the ports.