Samsung is expected to announce the Samsung Galaxy A52s phone as an upgraded Galaxy A52. The pricing of the phone and a few other important details have surfaced on the web through a retailer listing. While details about the upcoming device have not been officially confirmed, a recent leak has revealed its pricing for the European market. 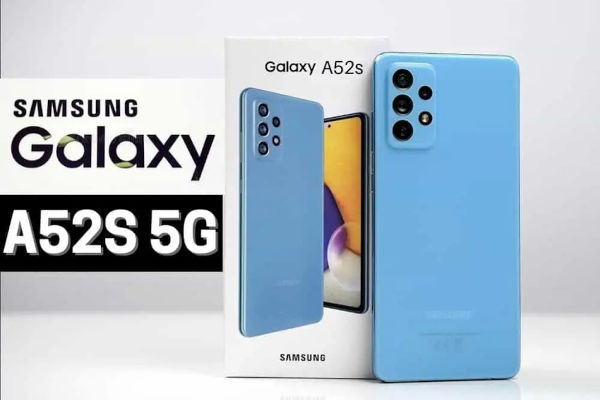 Earlier this year, the Galaxy A52s 5G passed through BIS (India’s Bureau of Indian Standards) and made an appearance on GeekBench with model number SM-A528B/DS. While the aforesaid listing revealed some key specs of the upcoming handset, details about the price tag it will be carrying were still scarce. The Galaxy A52s 5G will first arrive in the European market, according to previous reports.

The tech giant has kept details about the Galaxy A52s 5G under wraps. However, the phone could retain most of its other specifications from Galaxy A52 5G. In other words, it could feature a 6.5-inch S-AMOLED display with FHD+ resolution, and a refresh rate of 120Hz. The phone could house a 32MP front shooter and a 64MP main camera with OIS support. In addition to that, it may come with a 12MP ultrawide camera, a 5MP macro, a 5MP depth, and a quad-camera setup.

The phone will probably draw its juices from a 4,500mAh battery with 25W rapid charging support. Other notable features include the IP67 rating for water-resistant and dustproof. Aside from that, it has stereo speakers, a microSD card slot, and an in-screen fingerprint reader.

On July 31, DealNTech spotted the retailer listing of the Galaxy A52s 5G. As expected, the listing included important information such as color options, variants, and pricing. If the recently spotted retailer listing if anything to go by, the Galaxy A52s will ship with 12GB of onboard storage capacity. In addition, the listing suggests that the phone will retail for €434.64 (about $515). 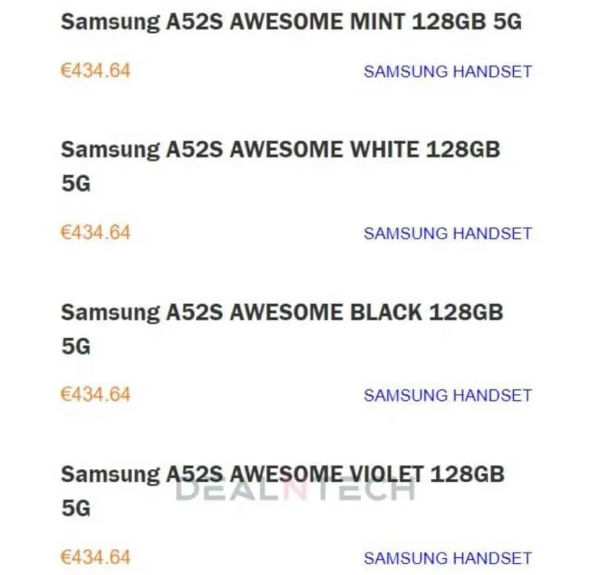 Samsung will be making the Galaxy A52s 5G available in Awesome Mint, Awesome Violet, Awesome Black, and Awesome White colorways, as far as color options are concerned. The phone’s BIS listings imply that it will arrive in the Indian market as well. The 12GB model could retail for INR 38,307 in the country, according to TechnoSports. The 6GB RAM + 128GB ROM version of the Galaxy A52 5G sold for €429 ($509) in Europe. This converts roughly to about INR 37,866.

Samsung hasn’t officially shared any details about the A52s 5G. More information about the handset will surface in the coming weeks.