Google Pixel 5a 5G Component Images Leaks Ahead Of Launch

Rumors surrounding the Google Pixel 5a mid-range phone have been everywhere but not cogent report on its specs. A recent report has now emerged, revealing some vital details about the phone and also claimed that Google may announce the smartphone tomorrow. The source has shared the images of the Pixel 5a components that are reportedly being shipped to the phone retail stores before the Aug. 17 launch date.

The new images again hint that the design of the Pixel 5a 5G will be almost identical to the Pixel 4a 5G from last year. The back panel seems to have a rubbery feel instead of the hard plastic that was offered on the predecessor model.

The top edge of the frame appears to feature a cutout for the 3.5mm audio jack. Its right edge has a ribbed power key and a volume rocker. A fingerprint scanner, and a squarish camera module that houses a dual-camera setup, and an LED flash can be seen on the rear shell of the device. One of the images shows that it is equipped with a 4,680mAh battery. 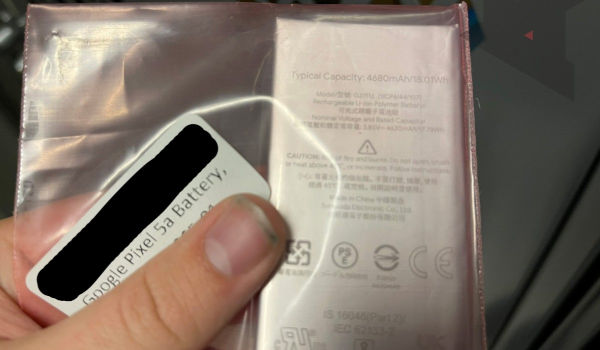 The Pixel 5a may come with 6 GB of RAM and 128 GB of native storage. Its rear camera setup may comprise of a 12.2-megapixel dual-camera system with OIS support and a 16-megapixel ultrawide lens. It could be an IP67 rated dust and water-resistant device. The smartphone may arrive with a price tag of $450 and it may sell only in Mostly Black color. It said that the U.S. and Japan are the only markets that will be treated with the Pixel 5a 5G.