HMD Global is planning to release some midrange phones soon and one of them is the Nokia G50. According to reports, the phone could be the most affordable 5G-ready Nokia phone. The G50 has accidentally appeared in an official promo clip shared on Nokia Mobile France’s Instagram account. Though the post has been deleted, folks at NokiaMob.net were able to capture the video clip and a screenshot of the Instagram post. 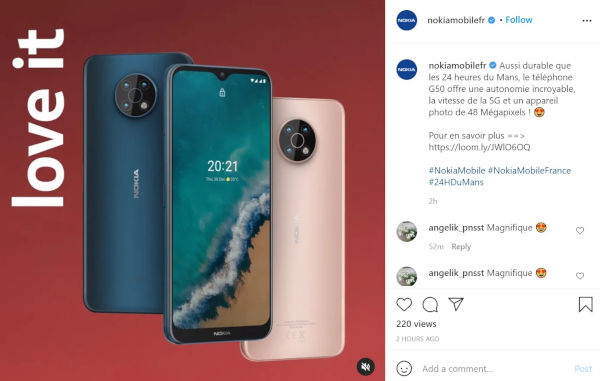 The Instagram post’s translated text reveals that the Nokia G50 5G will comes with an incredible battery life and it will carry support for 5G connectivity. For photography, it will feature a 48-megapixel main camera.

In the promo, the Nokia G50 5G can be seen in two color variants such as Blue and Midnight Sun. The front side of the device features a waterdrop notch screen and its rear side has a round-shaped camera module three cameras and an LED flash inside it.

Based on older reports have revealed that the Nokia G50 5G will be equipped with the Snapdragon 480 5G chipset. It may arrive in variants like 4 GB RAM + 64 GB storage and 4 GB RAM + 128 GB storage. It will come preinstalled with Android 11 OS. It is speculated that the phone will be also available in another color called Forest Black.

Now that the company has accidentally teased the Nokia G50 5G, it appears that its launch date is not far away. Nokia Mobile is an official partner of the forthcoming “No Time to Die” James Bond movie, which is scheduled to premiere on Sept. 28. Hence, it is likely that the Nokia G50 5G may debut around this date.