TECNO Mobile has officially confirmed that it will launch a brandâ€™s new budget smartphone in the Spark series, called Spark Go 2021 on July 1st. The teaser confirms that the phone will be available for purchase exclusively through Amazon in India. 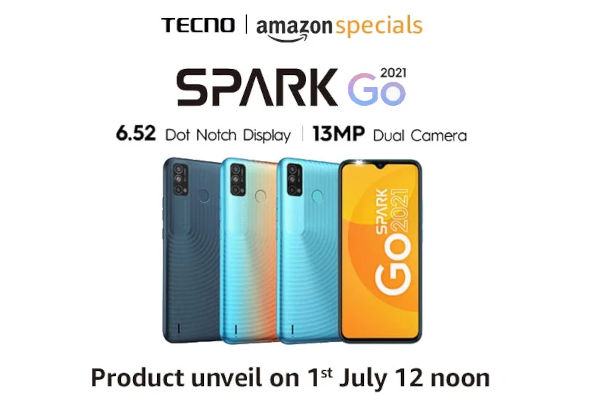 Just as the name implies, the phone will be launched as a successor to the TECNO Spark Go 2020 launched in September last year. It has also been confirmed that the smartphone will feature a 6.52-inch display with HD+ screen resolution.

The device is expected to come with a better processor compared to the MediaTekÂ Helio A20 quad-core chipset found in its predecessor. The phone is likely to offer 2/3GB RAM and 32/64GB of internal storage, but this is just speculation at this point.

As for the camera department, there will be a dual-camera setup on the phone which will include a 13-megapixel primary sensor and an unknown secondary sensor with support for Artificial Intelligence (AI) powered image processing.

On the front side, the device will feature an 8-megapixel snapper for taking selfies and video calling with support for LED flash and AI features. It also comes with a rear-mountedÂ fingerprint scannerÂ for added security.

In the software department, the phone will likely runÂ Android 11Â Go Edition out-of-the-box with the HiOS 7.6 custom user interface on top and will be powered by a 5,000mAh battery, the same as its predecessor.

The TECNO Spark Go 2021 will come in three color options in India â€” Black, Blue, and Orange. As noted, it will be sold on Amazon.in after it gets officially launched in the Indian market on 1st July.