Xiaomi Pushing Hard To Overtake Apple in Q2 & To Become Worldâ€™s No. 1

Xiaomi is currently the number 3 position in the top smartphone vendor chart. The company has is targeting all these to happen in the next five years. Lu Weibing, Xiaomi Group president and Redmi GM, is reported to have disclosed that the company expects to become the worldâ€™s number one smartphone manufacturer within the next three to five years, hoping to displace Samsung which has held the crown for several years now.

Lu Weibing announced the company’s projection at the 2021 Xiaomi school enrollment intensive training held on May 24. Weibing also disclosed that Xiaomiâ€™s mobile phone business still ranks at the third spot globally after emerging at the spot in the third quarter of last year. However, he disclosed that the company expects to surpass Apple and become the worldâ€™s number 2 smartphone vendor this year.

The latest data released by market research firm Canalys in April this year shows that global smartphone shipments reached 347 million in the first quarter of 2021. Among them, Samsung ranked first with a 22% share and shipped 76.5 million units. Apple followed closely with shipments of 52.4 million units, with a share of 15%. Xiaomi ranked at the third spot but it created the best single-quarter performance ever, with a year-on-year growth of 62%. The happens to be the worldâ€™s fastest growth rate yet for the industry with 49 million units shipped. The Chinese company also raked in up to 14% share of the market with the difference between Apple and Xiaomi standing at a little more than 3 million units. 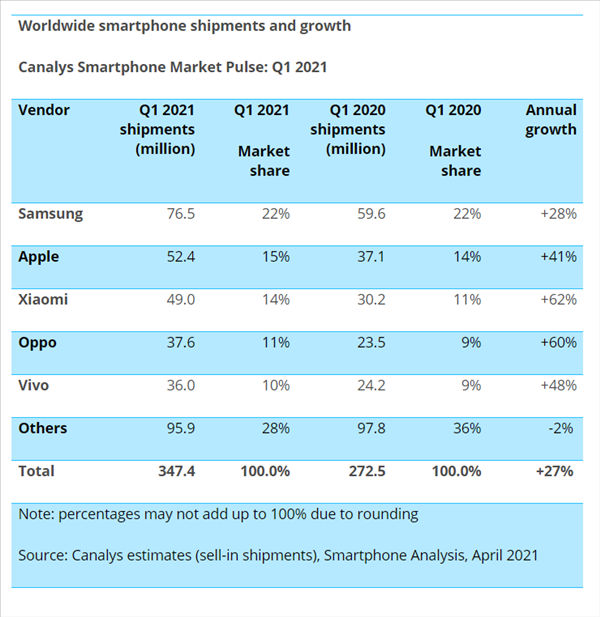 Xiaomiâ€™s latest flagshipÂ Mi 11 Ultra,Â Mi MIX Fold foldable smartphone, and other premium models will help the company achieve an impressive sales margin in the high-end market. The Chinese company has over the years earned a decent reputation for launching affordable premium smartphones. The company made an entry into the premium flagship market which has further enhanced its market share. Apple wonâ€™t be launching a new model any time soon so it is not impossible for Xiaomi to sell more units than Apple in Q2 but that will be short-lived. Apple will likely move back into the number two spot in the third or fourth quarter when it launches its 2021 flagship models. Furthermore, Apple will continue to dominate the top spot in terms of revenue.