In the face of the controversies surrounding its new terms of service and privacy policy, WhatsApp has finally gone ahead to rollout the new terms to its users. WhatsApp users now have have between now and May 15, 2021 to accept changes or get disconnected from the messaging platform.

Earlier this year, the Facebook-owned company released fresh terms and conditions aimed at increasing business transactions on the platform.

The policy update would allow owner Facebook and its subsidiaries to collect user data, including their phone number and location, which sparked a global outcry and a rush of new users to competitors Telegram and Signal, among others. 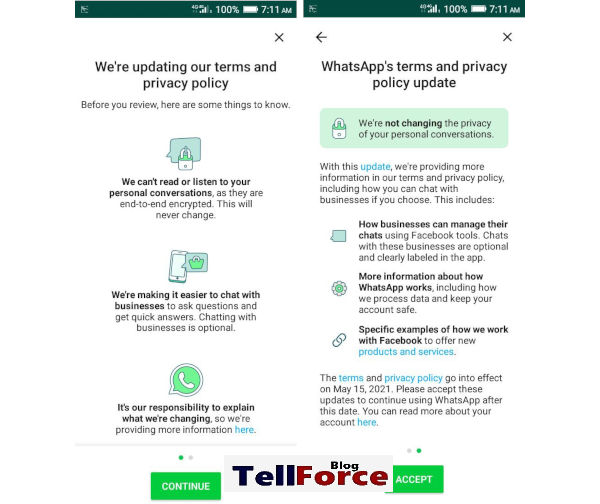 WhatsApp then moved to delay the newÂ policyÂ launch to May 15 from February and sought to clarify the update was focused on allowing users to message with businesses and would not affect personal conversations, which will continue to have end-to-end encryption.

â€œIf you havenâ€™t accepted by then, WhatsApp will not delete your account,â€ the company statesÂ in a FAQ on its website.

â€œHowever, you wonâ€™t have full functionality of WhatsApp until you accept. For a short time, youâ€™ll be able to receive calls and notifications, but wonâ€™t be able to read or send messages from the app.â€