Transsion Holdings, the parent company of Tecno, itel, andÂ Infinix has been the market leader in Africa for a while now. The combination of these three brands enjoys the largest market share in the continent. However, for the first time, 2020 was the first time one of its brands overtook Samsung and actually took the top spot. 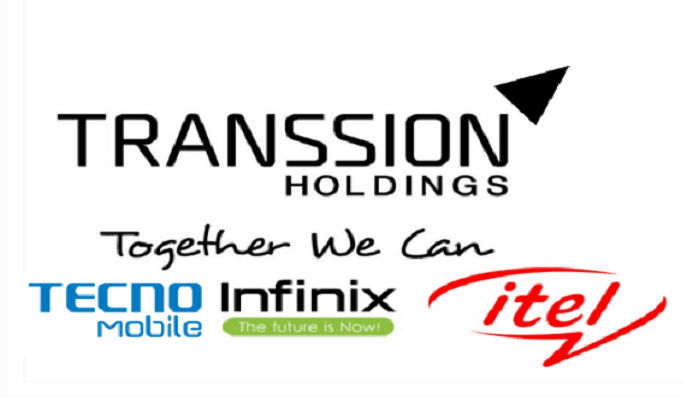 According to a Counterpoint report, Tecno dropped Samsung to the second spot in 2020. The smartphone brand saw its market share rise to 18% even though the market experienced a 6.7% drop in smartphone shipments YoY. The report revealed the COVID-19 pandemic also had effect on the market in the first half of 2020 with the second quarter being the worst as countries went into lockdown. However, by July, sales significantly improved. The market even recorded a 1.5% gain YoY in the fourth quarter of the year.

Samsung who had a market share of 18% in 2019 saw it drop to 15% in 2020. The reason is not far from supply chain issues due to the pandemic and a slow reaction towards the end of the year. Things should get better for Samsung this year as it has already launched its new Galaxy A smartphones in multiple markets in the continent. 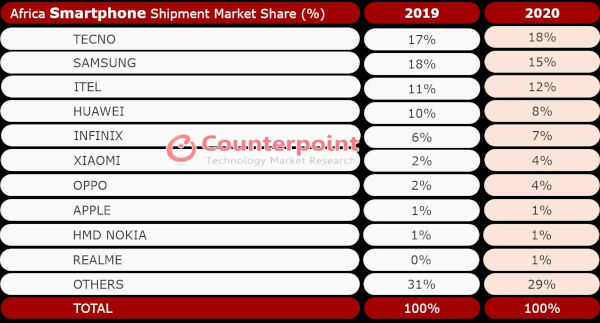 itel, who offers more affordable phones than its sister brands Tecno and Infinix takes the third spot with a market share of 12%. You will be correct to call its lineup entry-level and as we can see, that segment has helped it enter the top three.

HuaweiÂ still maintain the fourth spot in Africa despite the challenges it is facing – the US trade. The has prevented it from getting components and thus affected the launch of new models in the market. Its market share has dropped from 10% to 8% and that is expected to drop even further if nothing positive happens.

Infinix, the third Transsion Holdings brand gets 5 position with a market share of 7%. According to the Counterproint reports, the brand recorded strong market gains in the second half of the year and it is the transsion brand with the highest average selling price. However, it has begun to lower its prices based on market realities and is expected to grab a larger share of the market this year.

XiaomiÂ saw a double in its market share from 2% in 2019 to 4% by the end of 2020. Its shipments increased by 126% YoY, thanks to increased sales in key markets such as Nigeria, Kenya, Egypt, and Morocco. Xiaomi is also said to be expanding its offline presence in the continent and by directly managing channels, it should record an increase in market share this year. Xiaomi has alreadyÂ announced itsÂ  Redmi Note 10 series in key markets like Nigeria to take on the Samsungâ€™s new Galaxy A series smartphones.

OPPO also saw its market share increased from 2% to 4% and saw its shipments grow 57% YoY. It made its entry into the continent a few years ago and has already recorded success in markets such as Egypt and Algeria. OPPO is also building its offline channels and is partnering with key operators in the continent.

AppleÂ and Nokia (HMD Global) both retain their 1% market share. The latter is yet to record significant success in the continent, no thanks to better offerings at lower prices from the competition. Another name on the list is Realme with no market share in 2019 but now controls 1%. The brand is yet to launch in some markets such as Nigeria but may do so this year.