Tecno Spark 7 Render Leaks Ahead Of Next Week Launch

The Tecno Spark 6 was announced back in September 2020 with a Helio G70 SoC. The smartphone will now be followed up with its successor dubbed Tecno Spark 7 next week in India. According to a report from GSMArena, the an image of the Spark 7 sent to them reveals that the smartphone will sport a waterdrop notch display. 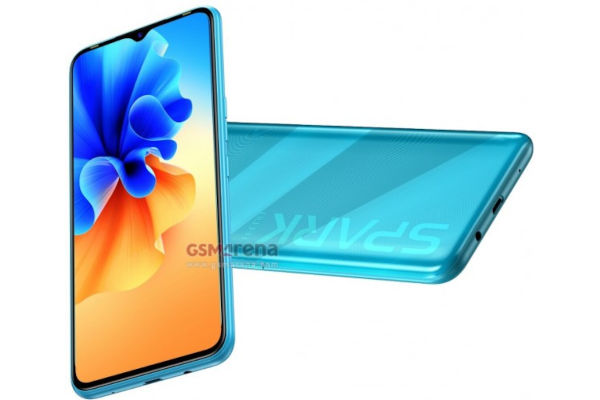 What We Expect From Tecno Spark 7

The spark 6 came with a 6.8″ HD+ punch hole screen, so we expect similar size or maybe larger display.

From the image, the Tecno Spark 7 has a textured back, with the big Spark branding on the bottom-left. The upper portion of the panel are hidden, so its number of rear cameras could not be seen. However, the Spark 6 came with a 16MP triple camera, and some upgrades are to be expected. The Spark 7 will likely also sport a rear-mounted fingerprint scanner like its predecessor.

Previously Tecno told us that the Spark 7 – which will be offered in Green, Black, and Blue colors – will come with video features such as Time-lapse Videos, Video Bokeh, and Slo-Mo video recording. The company also said that the Spark 7 series smartphone will feature Time-lapse on both the front and rear cameras, with speed settings ranging from 15x to 5400x.

The Spark 7 is expected to have at least a 5,000 mAh battery like the Spark 6, and the picture reveals a USB-C port, a 3.5mm headphone jack, and a microphone placed at the bottom. Oddly enough, we don’t see a speaker grille here, and neither is it visible in the lower half portion of its back cover, meaning it could be placed on the top-side of the smartphone or alongside the rear cameras. But we don’t remember when was the last time a smartphone was launched with a speaker positioned like that.

We encourage you to bookmark this site in order to get more about the smartphone before its official unveiling.