TCL is popular with experimenting its flexible displays. The company has showcased various concept phones with different forms of foldable displaysÂ and another with aÂ rollable display, but we are yet to see any in the foldable phone market. At its launch event held recently, it has yet again showed off another concept device called the TCL Fold â€˜n Roll. This phone does not only folds, it also unrolls, making it a 3-in-1 device. 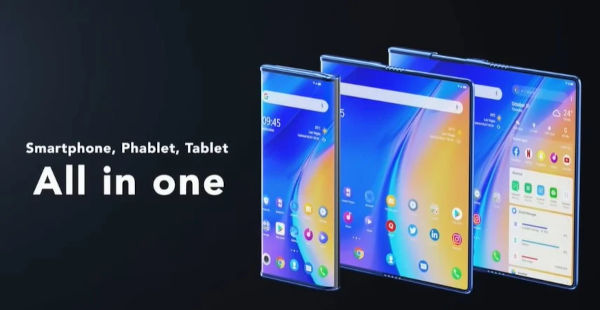 The TCL Fold nâ€™ Roll in its default state has an outward folding design. This means that in its folded state, the flexible screen covers both the front and the back.

In its folded state (smartphone mode), the front/cover display measures 6.87-inches. When unfolded, the display is 8.85-inches in size; TCL calls this phablet mode. Finally, when the display rolls out, you have a 10-inch tablet. So three different modes but a single device.

The device has two slits at the bottom which we believe are for the speaker. There is a USB-C port and what appears to be a stylus right beside it. There is also a button at the top and we can make out three cameras that double as both front-facing cameras and rear cameras.

TCL says the Fold â€˜n Roll is a concept device but showed albeit very briefly a working prototype. Nevertheless, the company does plan to release its first commercially available foldable device later this year.

Samsung is working on Galaxy Z series phone with weird…