Samsung will launch the Galaxy Quantum2 in South Korea on 23rd of this month. Ahead of its official announcement, this smartphone has leaked extensively revealing almost everything about it. Now, a new unboxing video appears online. 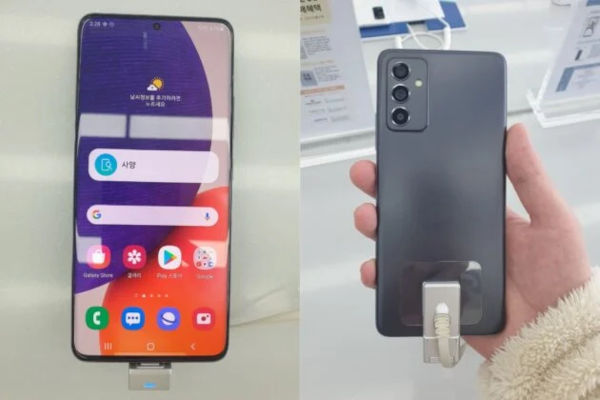 TheÂ SamsungÂ Galaxy Quantum2 unboxing videoÂ confirmsÂ the device to sport a curved display. The edges of the phoneâ€™s screen are curved minutely. Hence, they were not clearly visible in the leaked images. The video also reveals that the handset will ship with a 15W charger and a USB Type-A to Type-C cable.

Other than the above-mentioned specifics, this video does not reveal anything else that wasnâ€™t known earlier. The Galaxy Quantum2 is expected to come as Galaxy A82Â in global markets.

As per design, this upcoming Samsung smartphone will look identical to the recently released Galaxy A52Â andÂ Galaxy A72. However, unlike those handsets, this one will feature a metal frame, a triple camera setup, and will be only available in three colors (Grey, White, Violet).

The phone will be poweredÂ by a Qualcomm Snapdragon 855+ SoC coupled with 6GB RAM and 128GB storage with support for MicroSD cards. On the front, the device will flaunt a 6.7-inch 120Hz WQHD+ Dynamic AMOLED Infinity-O curved display with an in-screen ultrasonic fingerprint sensor and a 10MP auto-focus selfie camera inside the punch-hole.

The back of the handset will house a vertically-aligned 64MP (wide, OIS) + 12MP (ultrawide) + 5MP (macro) triple camera setup. Other features of this smartphone include Samsung Pay with MST, IP67 rating for dust and water resistance, Dolby Atmos speakers, One UI 3.x based onÂ Android 11, 4,500mAh battery, and 25W fast charging.