Samsung has announced a new â€œGalaxy Unpackedâ€ scheduled for April 28. While teasing the device, the company reveals that it is the â€œmost powerful Galaxyâ€ but the actual device is still unknown. 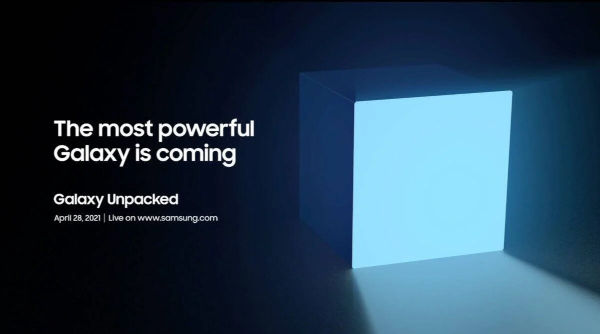 The event will be live-streamed on the company’s official website at 10:00 AM EST which is around 7:30 PM IST. This will be Samsung’s third â€˜Unpackedâ€™ event this year after it hosted one in January for the Galaxy S21 series and another in March for the launch of Galaxy A-series smartphones.

The company has already launched the Galaxy S-seriesÂ flagship lineup and we are expecting the Galaxy Note series around August. Thus, the device getting launched at this event could be a laptop.

Previous reports indicate that the South Korean giant has plans of launching a new Galaxy laptop, includingÂ Chromebooks. So, the upcoming event could be related to that. Going by the tagline of the event, the launch of mid-range smartphones seems unlikely.

Samsung is also expected to launch newÂ foldable smartphonesÂ but reports indicate that the devices could launch in the summer. The companyâ€™s rumored new laptops â€” possibly the Galaxy Book Pro and Galaxy Book Pro 360 â€” could come with 5G connectivity,Â OLED screens, S-Pen support, and other high-end specifications.

Meanwhile, Apple is also holding a launch event on April 20, titled â€œSpring Loadedâ€ where the company is expected to launch its new iPad Pro models. The company could also tease some of its Mac devices that are slated to launch later this year.