By Andre Falana On Apr 15, 2021
Share
Join Us On Telegram
Related Posts

Lenovo earlier this month launched the Legion Duel 2 gaming smartphone, and Zack, the author of JerryRigEverything YouTube channel decided to subject it to his popular “durability test”. The result was rather shocking, as the Duel 2 miserably failed the test -snapped into in three partsÂ during the bend test. 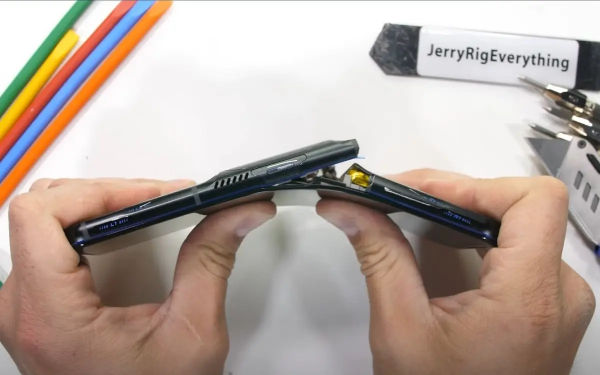 And now, Zack is back with a teardown video of the phone, hoping to see the reason for this shock result. Before we get to that, though, the usual way of getting inside applies – heat plus razorblade.

The back glass comes out in thirds, which isn’t that surprising considering how the phone broke. The middle piece seems to be the most removal-resistant, as it breaks while being pried, and underneath that we can see the fans.

The ultrasonic buttons/triggers are glued into the frame, and the battery isn’t one battery but two. There’s a dual vibration motor inside as well, and some minor protections against water. The vapor chamber is among the biggest ever, helping keep the innards cool along with the fans.