Instagram is rolling out a new feature that helps prevent users from viewing possible harassment in direct messages. This new feature is targeted at Instagram celebrities and creators.

The changes include new ways to filter message requests, and the ability to block the same user across multiple accounts.

The new tool announced today by Instagram will allow users to automatically filter out direct message requests containing offensive words, phrases, and emojis. The tool is targeted at celebrities and public figures who receive a large number of unwanted, harmful DMs.

Some people are fond of harassing public figures or celebrity in DMs and this new feature will help prevent such individuals.

Users will now have the option to block not just an individual user, but to â€œpreemptivelyâ€ block any new accounts they may create. This could help people who are repeatedly targeted by the same people, or who simply donâ€™t want the person to be able to find them with a new account.

The app is also adding a new tool to prevent abuse in â€œmessage requests,â€ the separate inbox for messages from people you donâ€™t already follow. 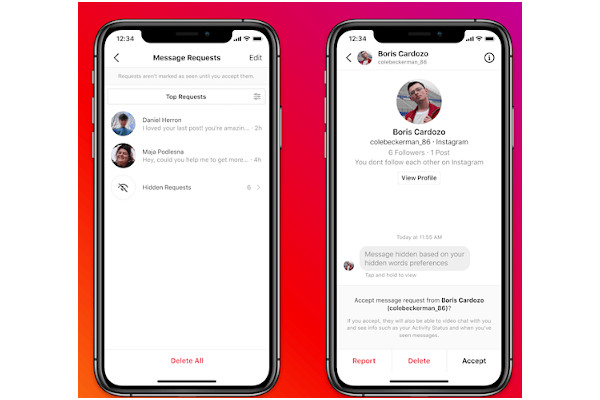 InstagramÂ is also adding a new filtering tool, which allows users to automatically hide message requests â€œcontaining offensive words, phrases, and emojis.â€ The company says it working with â€œleading anti-discrimination and anti-bullying organizationsâ€ to come up with a preset list of offensive phrases. Users can also customize their list based on what they donâ€™t want to see.

The new features will be rolling out to different countries in the coming weeks.