HMD Global is expected to announce a launch event on April 8. Rumors have it that the company will launch Nokia X10, Nokia X20, and Nokia G10 smartphones. According to earlier report on G10, it will be coming as a gaming-focused phone. However, its Geekbench listing is revealing something else as it has been spotted with a low-powered chipset. At the same time, a new report by Nokia Power UserÂ has revealed the key details of a new phone named the Nokia G20, which may arrive with the G10.

TheÂ Nokia G10â€™sÂ has scored 150 in the single-core test and 858 in the multi-core. The handset recorded such low scores because it is equipped with anÂ Helio P22 chipset, which is mentioned with the MT6762 model number in the listing. The SoC is supported by 4GB of RAM and it runs on Android 11 OS. 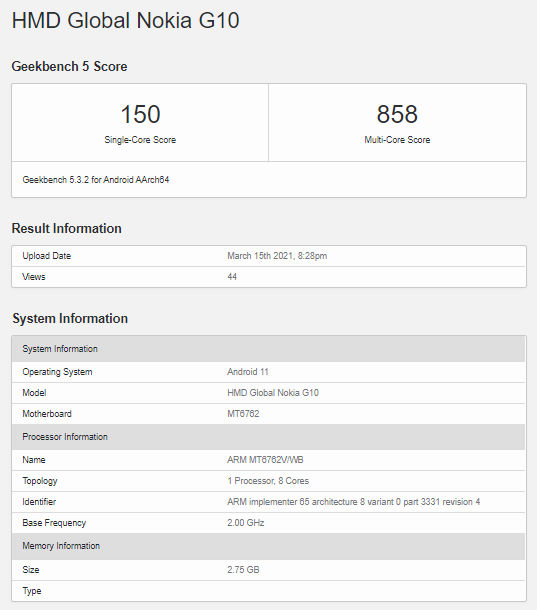 It is rumored that the smartphone features a 6.4-inch HD+ display, a 48-megapixel quad-camera system, a 16-megapixel selfie camera, 3GB / 4GB RAM, 32 GB / 64 GB storage, a 4,000mAh battery with 10W charging support. It may arrive in blue and purple color editions.

According toÂ NPU,Â its source has revealed that the Nokia G20, which will be positioned higher than the G10, will feature a more powerful MediaTek chip. Without mentioning the details, it claimed the Nokia G20 will come with better cameras than the G10.

The publication claims that the Nokia G10 and G20 will bear some similarities with the Nokia 5.4. It calls the G10 a low-priced Nokia 5.4 alternative. On the other hand, the G20 is expected to offer a few better specs than the Nokia 5.4.