Asus has launched the ROG Phone 5. The gaming flagship has been redesigned to improve performance and ergonomics and now comes in multiple models with the Ultimate edition featuring 18GB of RAM. 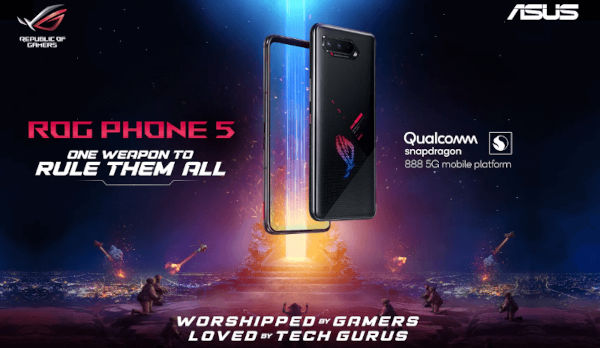 Breaking down the different versions. The vanilla Asus ROG Phone 5 has three main configurations or versions A, B and C as Asus calls them. The difference between them is the memory configuration.

Next up is the Asus ROG Phone 5 Pro, which has a single memory option â€“ 16GB of LPDDR5 RAM and 512GB of UFS storage. Finally, the ROG Phone 5 Ultimate increases the RAM to the record-equaling 18GB (storage remains at 512GB, thereâ€™s no 1 TB option and no microSD slot).

The trio are powered by the Snapdragon 888 chipset, no surprises here. Asus designed the phone to have a performance advantage thanks to other components and, surprisingly, the biggest win came from the battery.

It has a 6,000 mAh total capacity, split between two cells. This split allowed Asus to position the motherboard closer to the center of the phone, which has two advantages. First, it allows the AeroActive Cooler 5 to get as close to the chipset as possible. Second, the heat that is produced is kept away from the userâ€™s fingers.

The split design also allowed the company to double the charging speed to 65W. As before, you can use the USB-C port on the bottom of the phone for charging or the USB-C port on the side (which enables you to play and charge comfortably). The side port can also be used to hoop up an external monitor over HDMI, to connect headphones or to power the AeroActive Cooler 5. Weâ€™ll get back to the cooler in a second, letâ€™s look at the display.

The screen is protected by Gorilla Glass Victus and has a special coating that keeps your fingers gliding effortlessly even if they get sweaty.

Despite increasing the screen diagonal, Asus managed to shave 25% off the bezels so the ROG Phone 5 is only a couple of millimeters taller and actually a millimeter narrower than its predecessor. Weight is essentially the same at 238g.

The Pro and Ultimate versions will come bundled with the AeroActive Cooler 5. When Asus tested it, it found that the fan reduces surface temperature by 15ÂºC and chipset temperature by 10ÂºC. The cooler also packs two physical of shoulder buttons, a 3.5 mm headphone jack and a kickstand. Without the cooler you still get shoulder buttons â€“ the AirTrigger 5 ultrasonic buttons. These can be used as shortcuts outside of games too, e.g. by squeezing the phone in portrait mode.

If you want more accessories, the ROG Kunai 3 Gamepad is compatible with the ROG Phone 5 (and thereâ€™s a redesigned version available). The ROG Clip will allow you to use a PS4, Xbox or Stadia controller if you have one handy. There is also the Professional Dock with an HDMI port and two USB ports. The TwinView Dock 3 is not supported. 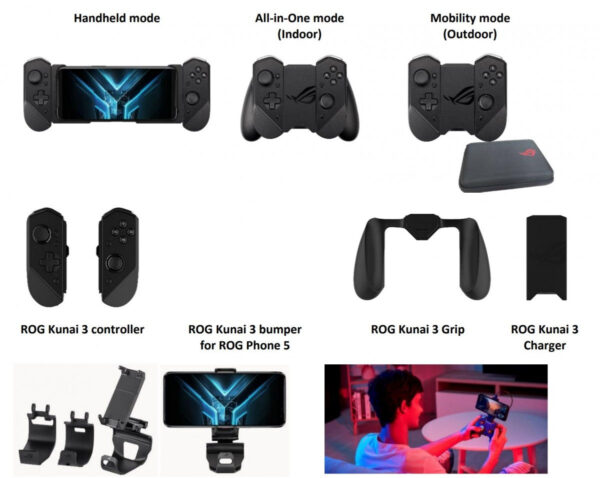 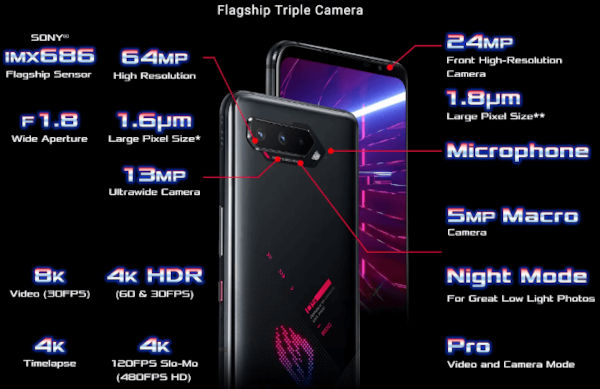 The selfie camera is essentially the same it has a 24 MP sensor (with Quad Bayer) and a dimmer fixed-focus f/2.45 lens. The main rear camera can record 8K/30 fps video or 4K at 60 fps (and 120 fps for low motion), video stabilization is electronic.

The camera is clearly not the focus of the Asus ROG Phone 5, but an excellent audiovisual experience is. To that end, thereâ€™s a 3.5 mm headphone jack on board with an ESS Sabre ES9280AC Pro Quad DAC. The Class G amp automatically detects the impedance of your headphones and switches to the appropriate mode (it supports headphones between 8 Ohm and 1,000 Ohm).

Also on board are front-firing stereo speakers powered by two Cirrus Logic CS35L45 amps, each of which can deliver 21% more power to its speaker than on the previous generation. If you want to use a Bluetooth speaker or headset instead, aptX Adaptive, LDAC and AAC codecs are supported.

We need to go back to the differences between the three models again. The vanilla phone has an RGB backlit Republic of Gamers logo, same as the 2020 phone. The other two have small touch-enabled displays on the back dubbed ROG Vision.

The ROG Phone 5 Pro has a color PM-OLED display, while the supposedly fancier Ultimate model has a monochrome PM-OLED display. The displays show customizable graphics for incoming calls, during charging or while a game is loading.

The three models are launching with Android 11 out of the box and give you a choice between using the gaming-inspired ROG UI or the stock-like Zen UI.

Here are the prices for the three main versions of the Asus ROG Phone 5. Note that the Pro and Ultimate come bundled with the AeroActive Cooler 5, while the vanilla model gets only the Aero case and HyperCharger. The vanilla model will be available later this, Pro is coming in April and the Ultimate limited edition goes on sale in May. 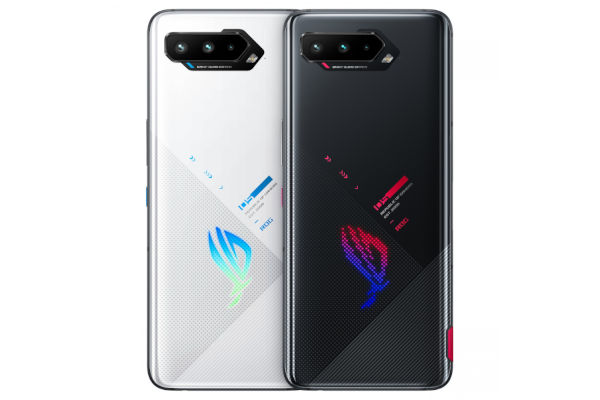 The comes in two colors, Phantom Black and Storm White.

Android 11 Has The Fast Adoption Rate Ever in Android Ecosystem